Crow is the protagonist villain of the indie game Nefarious. He is a supervillain and mechanical genius who aspires to take over the world.

He is voiced by Joshua Tomar and his singing voice is provided by Xander Mobus.

The story begins in Macro City, with Crow kidnapping Princess Mayapple. After heading throughout the city, he meets his arch-enemy Mack, who actually doesn't engage in the fight and breaks up with Mayapple. Back on his airship, the Sovereign, he tells his assistant Becky Rockler of his plan to kidnap five princesses. After capturing Princess Apoidea, Becky reveals his desire of using the princesses to power the Doom Howitzer to take over the world. In Winterdown, he encounters and bests his rival Dr. Mechano and captures Princess Ariella. Moving on to Sukochi, he passes through the Gauntlet of Man and bests the 8-Bit Heroes, but is forced to nab Prince Malachite instead of Princess Tephra, due to the latter's might. After a brief issue with money, he gathers the funds needed through treasure and heads out to capture Princess Farrah Day, who believes him to actually be heroic. Facing Mack in combat, he takes a detour before the end and appears on "Would You Date A Super Villain?", thinking of bettering his image. After a brief crisis fighting against the ogres after Malachite commits treason for confessing love to Crow, he heads off to the Doom Howitzer on foot (Tephra wanted the weapon for herself, and blasted the Sovereign to pieces.), reaches his base, fights against some of the heroes he fought, and gets to the Doom Howitzer.

In the bad ending of the game, Crow has a final duel with a powered-up Mack, and fires the device, weakening the world's nations severely so Crow can take control, which he does. However, a beacon of hope remains, as Mayapple escapes and vows to stop him. In the good ending, Crow doesn't activate the device due to a growing bond with his captives, annoying Becky to the point where she betrays him and tries to take over the world herself. With Crow wounded, Mayapple takes command and bests Becky herself. With the day saved, Crow and Becky head off to a hillside area, Crow forgiving his assistant (but still docking her pay), and claims that after a vacation, he'll come up with a fool-proof plan, which even friendship can't stop.

Crow makes an appearance as the final boss of the Arcade mode in Indie Pogo. Fought on the Sovereign Deck stage, Crow is far stronger than the normal playable character, with his pogo doing 5 damage instead of the usual 3. He can also use a ground-pound attack, charge forward with a drill, and fire grenades and missiles. The main developer of the game, Trevor Lowe, has stated that if Crow were to become playable, another boss would have to replace him.

Crow appears as a playable character in the demo for Indie Game Battle. He would appear in the full game as well, if not for the game's cancellation.

Crow is set to become a playable character in the upcoming Indie Assault.

Crow has black eyes and blond hair, and wears purple mechanical armor with red highlights. The armor consists of a purple helmet with two headlamps, the main body portion, and a gigantic gauntlet which he uses to fire grenades. His right arm is almost entirely made of machine parts. He also has a collection of costumes and disguises to wear if needed.

A classic villain, Crow enjoys being a bad person, fighting for his reputation as one. Crow desires to take over the world, and is rather vain. However, Crow is quite kind to his minions and captives, although he doesn't admit to it. Crow possibly doesn't consider himself to be evil as well, as his answers on "Would You Date A Super Villain?" all try to deride the fact. 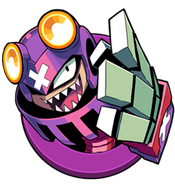 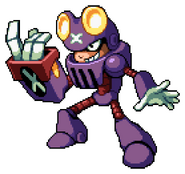 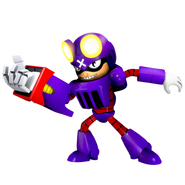 Crow in Indie Game Battle.
Add a photo to this gallery

Retrieved from "https://villains.fandom.com/wiki/Crow_(Nefarious)?oldid=3548376"
Community content is available under CC-BY-SA unless otherwise noted.