Crowbar is a supporting antagonist of the 2011 film Transformers: Dark of the Moon. He is a member of the elite Dreads (the Decepticons' top infiltration and assassination team) and is specialized with "breaking and entering", in which he utilizes a special kind of technology called "nanotech sentries".

Crowbar, Hatchet and Crankcase are among the Decepticons hidden on the Moon.

When the Autobots investigate the crashed ship on the moon containing Sentinel Prime, the three Decepticons secretly return with the Autobots. Once on Earth they take on the disguise of Earth vehicles. The three Dreads chase the Autobots on a highway while they escort Sentinel Prime to NEST.

Hatchet dies at the hands of Dino/Mirage and Bumblebee, while Crankcase and Crowbar survive and make their way to Ironhide.

After a stand off, the Dreads pretend that they surrender their weapons by dropping their guns. However, they had spiked clubs behind them and Crowbar throws one of his at Ironhide. They start to attack Ironhide and Sideswipe.

Crowbar is shot in the head by Ironhide while Crankcase is stabbed with an explosive dart and killed.

Crowbar as seen in the Nintendo DS Dark of the Moon videogames.
Add a photo to this gallery 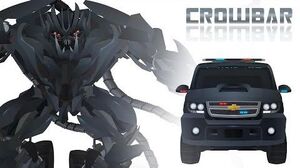 Retrieved from "https://villains.fandom.com/wiki/Crowbar?oldid=3405170"
Community content is available under CC-BY-SA unless otherwise noted.