Destroy all magic-users to fuel itself.

The Crown (also known as El Rey's Crown) is the overarching antagonist of the Rooster Teeth animated web series Nomad of Nowhere. It is a sentient crown with vast magical powers that helps corrupt El Rey and turn him into a genocidal tyrant.

While most of the Crown's pat is a mystery, it is known that it was located in a hidden castle in Nowhere. The castle was filled with traps, monsters, and obstacles to keep anyone from reaching the crown, and it lied dormant for many years.

However, the castle was found by a young and heroic El Rey, who made it past the traps and found the crown. Upon attaining it, he crowned himself as a king and built up the castle. At first, El Rey was a benevolent and kind king, using the magic of the crown to provide the hungry with food, the sick with health, and the sad with joy. He was much loved and revered by his people, who often asked him for help, to which he almost always obliged.

However, as the king grew older, his magic powers began to steadily fade until one day they were suddenly gone, with the crown seemingly drained of its power. El Rey sought the help of a magician to restore the crown's power, but the crown devoured the magician and regained its power. El Rey reluctantly returned the crown to his head, and when he did, it restored his youth and all of his magical powers. However, El Rey turned evil because of this; it is currently unknown if the crown warped and twisted his mind, or if the newfound power and control became too intoxicating and El Rey chose to become a new ruler of wickedness and evil.

El Rey then summoned all magic-users in Nowhere to his castle and used the crown to destroy them all, fueling the crown and further increasing his magical power, until none remained. El Rey then turned into a malevolent and cruel monarch. When the people stood up against him, El Rey used magic from the crown to transform one of his guards into a fearsome minotaur, who proceeded to commit mass slaughter on the citizens of Nowhere. It claimed the lands to the west, and El Rey founded a counsel of four governors (one being the minotaur) to claim the lands to the north, east, and south, with him stationing his kingdom in the center of Nowhere, thus creating the brutal monarchy of Nowhere.

The crown remained on his head, fueling his insanity and wicked nature. When El Rey and the crown learned of one magic-user that escaped, the Nomad, the demanded the Nomad be captured and put a bounty on him, even employing the help of Don Paragon and the Dandy Lions to aid in his capture.

El Rey and the crown are the driving forces behind most of Season 1, instructing Don Paragon to bring him the Nomad. Don, in turn, sends out the Dandy Lions and their leader Toth to hunt the Nomad throughout Nowhere.

In the episode "El Rey", the Nomad happens upon an old castle, and begins to see flashbacks of El Rey's origins and past before sadly leaving the mysterious place.

Don Paragon captures the Nomad, but it escapes with help from Skout. As Don Paragon lies defeated, El Rey confronts him through a murder of crows, presumably controlled by the power of the crown. El Rey expresses his disappointment, and Paragon asks if he may have a little of El Rey's magic to help him in his next attempt to capture the Nomad. However, El Rey has the crows attack and kill Paragon, devouring every part of him and leaving only the compass that points the way to magical items. El Rey then sets his sights on Toth as his new enforcer.

One of the biggest mysteries regarding the crown is if it was benevolent like El Rey during the king's time as a hero, or if it was secretly evil the whole time and was just manipulating El Rey to trust it and eventually bring it magic-users for it to devour and fuel itself with. Most evidence points towards the latter, as the crown does not hesitate to devour the magician when it is low on power, and it can be assumed it only acted kind (or even inanimate) only because there were no magic-users to devour.

As such, the crown appears to be cruel and malevolent, only caring about manipulating others to bring it more power and to keep it strong and mighty. 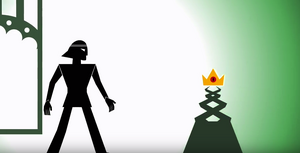 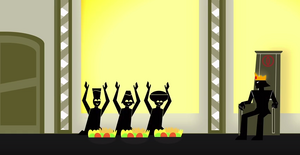 The crown sitting upon a benevolent El Rey's head. 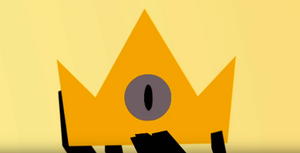 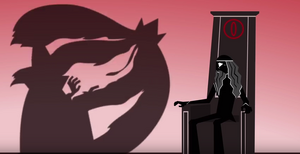 The crown devouring a victim. 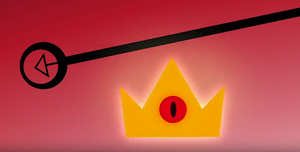 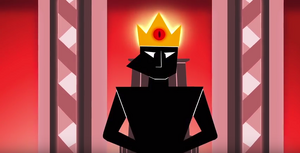 The crown on a newly turned El Rey. 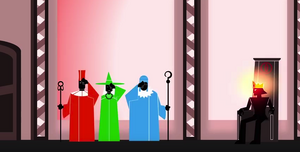 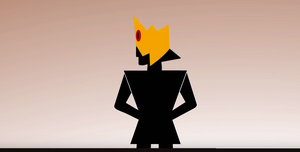 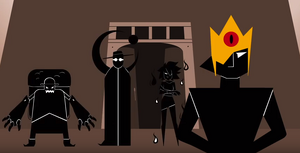 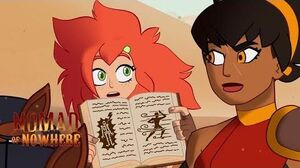 Retrieved from "https://villains.fandom.com/wiki/Crown?oldid=3912130"
Community content is available under CC-BY-SA unless otherwise noted.