She was portrayed by Glenn Close, who also played Alex Forrest in Fatal Attraction, Marquise de Merteuil in Dangerous Liaisons and Dr. Caroline Caldwell in The Girl With All the Gifts.

Cruella is first seen arriving in her car to the House of De Vil. A chauffeur opens her car door for and greets her, only for her to flick a cigarette ash onto his shoe. She then exits the car and heads inside the building; first being greeted by her butler, Alonzo, and then by her employees before approaching Anita who is designing two new coats; one with stripes and another with Dalmatian spots. Anita is shocked nervously by Cruella's presence at first and tries to hide the design with the spots from her, but Cruella takes it and is entranced by it. Cruella then notices a picture of Anita's dog, Perdita and picks it up. She is charmed by her dog, but wonders why she has spots and Anita explains that Perdita is a Dalmatian. Cruella then asks a variety of question; was Perdita her inspiration, she was; does she have long hair or short, short; is her fur coarse or fine; a little coarse; much to Cruella's dismay; but finds redemption when Anita says it was very fine when she was a puppy. After this, Cruella tells Anita that the two of them need have a talk and calls her to her office and to bring the spotted coat design with her as well.

In her office, Cruella tells Anita to tell her more about the Dalmatian spots, pointing out that she did leopard spots in the 80's. Anita tells her that Dalmatian spots are a little different.

After, Anita was married to Roger, she received a fur coat made from a white tiger by Mr. Skinner. Later she arrives at Anita and Roger's new home and meets them after Perdita was brought to a vertinary clinic. Roger meets her pleasedly, but soons to anger and frustation, when she mocks her family and learns that Perdita is given birth in a few months and she leaves.

After the puppies are finally born, Cruella visits again and asks Anita, if the puppies are already born and she was shocked to see them still no spots and Anita informs her that they will have spots in a few weeks. Cruella immediately asks both Anita and Roger to put the puppies on a bag or reserve for her offering. Roger angrily refuses saying they're not for sale and Anita gains the courage to stand to her also. This causes Cruella to fire her from her factory promising vengeance and calling her and Roger "Fools and idiots" in the process (this is later foreshadow in the ending after her arrest).

When the puppies are grown, she sends Jasper and Horace to steal them after Roger and Anita went out for a walk taking Pongo and Perdita with them leaving the puppies unprotected. Jasper and Horace breaks in and locks Nanny who was trying to stop them in the closet and steals the puppies. As they're ready to get to their truck, they are caught in the act by the pensioner's bulldog who realizes who are they, only to be hold back by the pensioner who did not realizes that Jasper and Horace are dognappers and his barking alerts Pongo and Perdita to rush back home and make Roger and Anita realizes what they have done. When she learned that she have the puppies for her fur coat, she laughs maniacally.

Later on, she realizes the theft has made in the headlines and has been subject for everything, thus the police ransacked every home of every suspect. Cruella orders Jasper, Horace and Skinner to make the fur coats and warns them that the police are everywhere. However the puppies escaped, with help from the farm animals and all of dogs in London. When she arrives at the deserted mansion where she kept the puppies, she asked Jasper who is on the roof where the puppies are and he replies that they're gone and she furiously orders him and Horace (who fallen on the frozen pond) to get the puppies before the police does and she hops on her car not realizing that a skunk has stowed on board.

She followed the tracks left by the puppies all the way to the farm where they are staying, she falls one of the traps, then sees the puppies from the window escaping back to the village where the police are waiting and already arrest Jasper, Horace and a beaten Skinner, before she could get back to her car, she falls into a pit of molasses. Battered and sticky, she is determined to get her fur coat. After ranting to the farm animals and during another psychotic laughter with thunderclaps (The sky is not covered in thunderclouds). A horse named Punch kicks Cruella out of the barn in a fit of rage and she lands on a mud.

The Police then arrives and immediately arrests her. Cruella is found guilty of crimes such as the tiger stealing, theft of the 15 puppies, conspiring to commit crimes, animal abuse, crimes against humanity and verbal assault, sentencing her to life in prison (which is briefly reduced). While on the way, Cruella scolds Jasper, Horace and Mr. Skinner for their incompetence and was shown to have brought a real skunk instead of her purse (by accident) and she, Jasper, Horace, and Skinner are then sprayed by the skunk, causing them to scream in terror (while Horace covers his nose) indicating that Cruella not Roger and Anita is really the fool and idiot. The puppies along with Pongo and Perdita are return back to Roger and Anita and they also adopt the 84 puppies that Cruella also stole.

Cruella has seemingly been released of her obsession of furs and now loves puppies and has decided to get rid of her fashion house because the clothes are made out of fur. While visiting Chloe Simon, one of the puppies nearly falls out the window and while Chloe and the other puppies try to rescue her, Cruella hears the chimes of Big Ben and she reverts back to her original obsession with spots, having a hallucination seeing black spots everywhere and she now wants 102 Dalmatian puppies for her designs.

She enlists the help of another fashion designer named Jean Pierre Le Pelt and an unwilling butler named Alonso. She frames the owner of the animal shelter Kevin Sheppard for kidnapping the puppies and he is arrested. He escapes from jail and tries to help Chloe rescue the puppies, but they are trapped by Cruella. The puppies escape and Cruella tries to capture them, and at the same time Alonso redeems himself by defeating Jean-Pierre Le Pelt and freeing Chloe and Kevin while Cruella is defeated by getting baked in a cake. The police come and arrest her and Le Pelt.

She is then sentenced to spend the rest of her life in prison and has her fortune 8 million pounds taken away from her and given to Kevin and the Second Chance shelter. 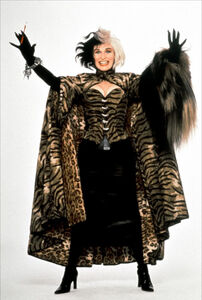 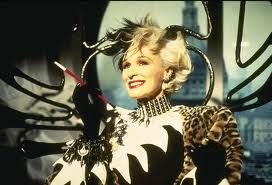 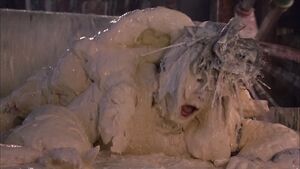 Cruella struggling to free herself from a rolling pin as she undergoes the humilating process of getting baked into a cake. 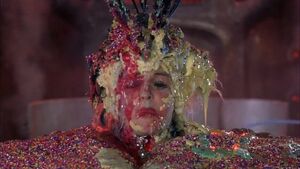 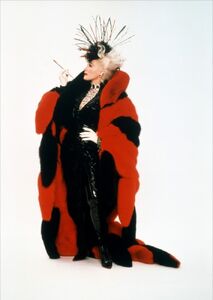 Cruella receives her first wave of humilation as eggs are poured onto her.

Cruella watches as a mixer comes down from above and submerges next to her, unaware it will soon mix her with the mixing bowl's contents and turn her into a ball of cake batter. 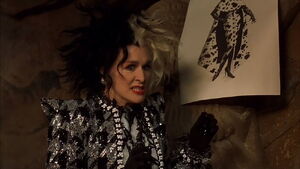 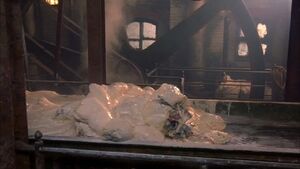 Cruella after she gets dumped out the mixing bowl. Due to being mixed with the mixer, she was turned into a massive ball of cake batter. 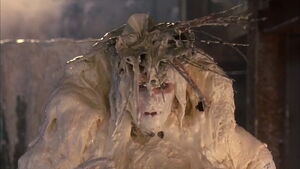 Cruella covered in cake batter as a result of being mixed in the mixing bowl. 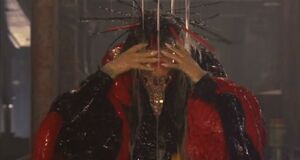 Cruella slimy and drenched after being dumped on with eggs. 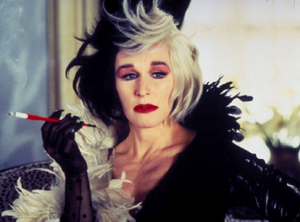