Get revenge on Baroness von Hellman for killing her adoptive mother.

She is a young aspiring fashion designer who seeks revenge against her birth mother Baroness von Hellman for the death of her adoptive mother Catherine. She is an adaptation of the character of the same name from Disney's 101 Dalmations.

She was portrayed by Emma Stone, who also played Abigail Hill in The Favourite.

Estella was born in the 1950s to the Baron and Baroness von Hellman, the former of whom was overjoyed and the latter of whom was enraged at the thought of giving another living thing more attention than herself, almost immediately from her birth Estella had a noticeable peculiarity, with her hair being equally split as black and white. On the day of Estella's birth, the Baron was away on a business trip and his wife used this to her advantage the Baroness ordered her butler John to kill Estella, not wanting to take on the responsibility of looking after a child, secretly however John instead gave the baby as well as the necklace and key to the box containing the documents revealing her true heritage to the maid Catherine so she could live and be raised in a loving home. The Baroness lied to her father that she had suffered a miscarriage, causing the Baron to die from a broken heart.

Catherine fled from the Baroness's home and raised Estella to be a polite and kind young girl who kept her head down and hid her talents to a reasonable extent from the world. This became difficult during Estella's school time however where she was bullied and frequently caught up in fights, culminating in her headmaster eventually expelling her, before he could officially announce this however Catherine told him she was withdrawing her from the school by choice. Catherine planned to take Estella to London and the two decided to come up with a future plan when they arrived. Before heading for the city however Catherine decided to stop off at the Baroness' mansion to ask for financial support making sure to remove her necklace and give it to Estella first so the Baroness wouldn't realize the girl's true heritage. After noticing who's house they were at, Estella decided to explore and look around at the Baroness's party before eventually being caught by John, thanks to her dog Buddy running loose. As John was trying to escort Estella discretely out of the mansion the Baroness's Dalmatians soon noticed her and began pursuing her. The chase brought Estella outside and she hid behind a bush. Unfortunately for Estella however the Baroness whistled for her dogs to come for Catherine which they did, knocking her over a balcony leaving her to fall to her death. As Estella didn't fully see what happened she mistakenly believed Catherine's death was her fault since she distracted by the Dalmatians and she fled the scene to London, feeling immense remorse over what had happened.

The following morning, she met two street urchins Jasper & Horace who felt sympathy for her and decided to take her in as a member of their gang. In order to disguise her true identity Estella dyed her hair red and continued working as a thief with the duo for the remainder of her childhood.

Cruella continued living with Jasper and Horace throughout the remainder of her childhood and joined them on their thieving escapades and the three managed to live comfortably for over a decade. On Cruella's 21st birthday Jasper gifted her with an employment letter for a department store to which she was overjoyed, unfortunately however this turned out to be a mere cleaning job which left Cruella unfulfilled especially thanks to her surly and aggressive boss. On one night a drunk Cruella decided to remake the look of one the shop's display window mannequins and after doing so fell asleep. Her boss was left horrified at what she had created and was prepared to call the police on her for vandalism, at this moment however the Baroness entered the scene and impressed by Cruella's handiwork decided to hire her as a new designer.

Estella began working for the House of Baroness and quickly fell into the favour of the Baroness herself, becoming her most trusted and esteemed employee. Estella enjoyed her job at first until one day noticing that the Baroness was wearing her mother's old necklace, after hearing the Baroness explain the story behind it in which she claimed that "a woman who used to work for her came around in an attempt to steal it for financial support" before falling off of her balcony Estella realized that the Baroness had killed her mother and proposed a revenge plan as well as a way of getting her necklace back to Jasper and Horace after returning home.

Estella dyed her hair back to how it originally was and convinced Jasper and Horace to help her in crashing a new ball the Baroness was holding. Here she revealed herself for the first time as Cruella De Vil and the Baroness was impressed by her boldness although didn't recognize who she actually was and after a brief conversation ordered her to be escorted out of the premises, thinking quickly Cruella drew Hellman's attention to a mouse on her plate, distracting her long enough so that she could grab the necklace, unfortunately however during an ensuing scuffle the necklace was dropped and ended up being swallowed by one of the Hellman Dalmatians. Cruella, Jasper and Horace fled the scene by stealing the Baroness' car and a frustrated Cruella decided their next move should be to steal the dogs, all the while Jasper was becoming unnerved at Cruella's increasingly unhinged state.

Cruella takes part in designing a look for the Baroness' upcoming show, secretly making its lining out of moth cocoons while preparing for an event of her own, a riot involving a boastful musical number in which she wore a Dalmatian print trench coat in order to mess with the Baroness into thinking that she skinned her dogs. Although the night appeared to be success and Cruella took great pride in humiliating the Baroness the victory was ultimately short lived as the latter had noticed Jasper and Horace walking home and decided to have her goons restrain them, planning to frame the brothers for Cruella's impending murder. It was here in which Cruella realized how much of a monster the Baroness really was, with her taking a while to even remember who Cruella's mother was while also expressing zero remorse for not only murdering her but what she was about to do to Cruella. She set the house ablaze and fled the scene while falsely tipping of the police about Jasper and Horace. Cruella although aided by Buddy in trying to escape eventually passed out from smoke poisoning although was secretly saved by John.

Cruella then concocted a plan to have the Baroness face punishment for her crimes by staging it to look as though she murdered her by shoving her off of a balcony as she did to her mother but this time in front of witnesses, while the world would see Estella as dead and an innocent victim to the cruelty of the Baroness, they were lift blissfully unware to the fact that Estella and Cruella were the same person. Cruella De Vil became the new owner of the Hellman estate now renaming it "Hell Hall" as Estella being the Baroness's daughter would now own her land however prior to her death she wrote off ownership of the property to her "dear friend" Cruella De Vil in the event of her death. Cruella moved into the house with Jasper, Horace and Artie with John remaining as her valet, now loyal to her in the same way he once was to the Baroness before learning of her true colours.

After her inheritance, Cruella sends of the Dalmatians puppies to Anita for her help and the baroness’ former lawyer Roger, now a songwriter, as an apology for getting him fired. Afterwards being given their dogs, Roger writes a song named after her. The ending credits of the movie suggest she took over the House of Baroness and started her career as a fashion designer becoming more successful than ever before.

In her childhood, Estella was initially tough, abrasive and confident, unafraid to speak her mind or fight to defend herself, however following her mother's death and due to a desire to live on as she would have wanted her to Estella became rather meek, shy and passive in her adolescence although still had an unmistakable amount of intelligence. Over the course of the film, and as she learns more about what really happened to her adoptive mother, Estella becomes more and more confident and assertive once again, and she fully embraces the identity of Cruella De Vil.

As Cruella, she was sadistic and ruthless, but also quite playful and eccentric, with an overenunciated manner of speaking and became far bossier and ruder than she was previously. Ultimately, she was driven out of a desire for vengeance, and although upset when she learned of her true heritage and the deception of her adoptive mother, she relented out of love for her and still targeted her sights on her biological mother, the Baroness, who she grew to resent and hate as the film went on. Although quite unstable, Cruella was a very intelligent, creative, pragmatic and quick-thinking individual who managed to stay one step ahead of the Baroness for the majority of the film thanks to her cleverness.

In spite of her negative traits, Cruella did still have more redeeming qualities than any other version of her depicted. She genuinely cared deeply about Jasper and Horace and viewed them as her closest companions and only family. She also managed to maintain several friendships and get along with others well such as with Artie, Anita and ultimately John when she learns of his true intentions.

Estella was a slim and tall woman with beautiful features and green eyes. Her skin was very pale and this was enunciated when she fully embraced herself as Cruella by her makeup which was very bold and striking, with her favouring black, white and red in terms of colours. As Estella she sometimes wore glasses although appeared to have decent enough vision without them.

As both Estella and Cruella, she had a keen eye for fashion and almost always wore incredibly extravagant, distinguishing and flashy outfits with her usual black, white & red motifs. Over the course of the film she wears 47 distinct outfits.

Estella was born with hair that was split down the middle as black and white and retained this throughout most of her childhood until meeting Jasper and Horace when she decided to dye her hair red to distance herself from her original identity. Upon adopting the persona of Cruella, she decided to allow her hair to return to its natural black & white form, creating the iconic look to the Cruella we have seen in the original but with darker clothes. 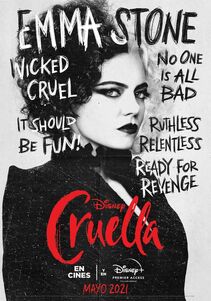 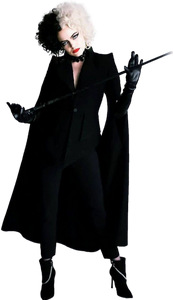