Make fur out of the puppies (formerly)

Steal the Fairy Godmother's wand to take revenge on the puppies

She was portrayed by Wendy Raquel Robinson.

She appears almost a lot like her film's counterpart with variating differences between the hair style and coat. Having a black and white coat and pants, and red gloves with a ring.

After her defeat, Cruella was imprisoned on The Isle Of The Lost. She is now the mother of Carlos De Vil, however she treats him like a slave and forces him to do ridiculous tasks and if he doesn't do or fails them she punishes him brutally.

After Maleficent convinces her to use Carlos as well as the other parents and their children in a plot to steal the Fairy Godmother's wand she agrees. Upon seeing Carlos' new dog Dude she comments that he's a perfect size for ear muffs, angering Carlos and she is horrified to see him stand up to her.

At the end of the movie she is seen watching the Auradon celebration after Maleficent's defeat and Ben's coronation along with Evil Queen and Jafar. 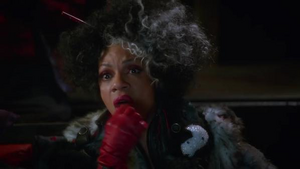 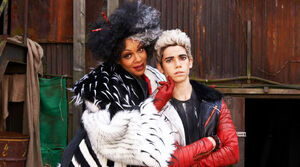 Cruella with her son, Carlos. 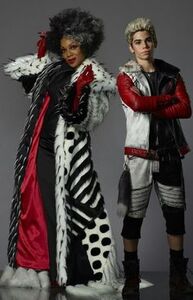 Cruella and her son side by side.