Parody Zombies
The Crumbies are the titular main antagonists of the Sesame Street short video, The Walking Gingerbread, which is a parody of The Walking Dead. They parodied the Zombies.

During the Crumby Apocalypse, Sheriff Lick Graham (Cookie Monster) opened his cookie box, which attracted lots of Crumbies and they stole his cookies. Lick's friends, Dough Roll and Macaroon told him to control himself from opening the box. Lick and his friends hid in the house, but the Crumbies still came when Lick opened the box. They all went in the cookie safe zone. The cookies are safe if someone did not open the box. The governor made Lick dance, so that he can't open the box. Lick noticed that the Crumbies could also not steal the cookies when being distracted by dancing, so he made them go in. They all ran away when Lick told them they are delicious.

They appeared as gingerbread men and some of them got bitemarks with unknown reason.

They are mindless beings that only wanted cookies, so they kept on stealing cookes from anybody who opened the box. 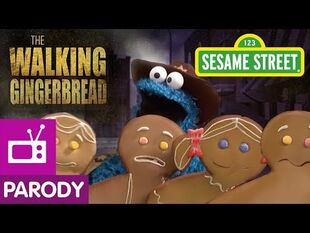