The Crumbler, also known as Alexander Percy Tuttle, is a villain in the DC Universe and an enemy towards both Green Arrow and Green Lantern.

After he killed Galactus, Krona wrecked havoc with reality. The Grandmaster had trapped Krona between the universes using the 12 items of power, but Krona began accelerating the process, threatening to destroy both universes.

Krona intended to cause a new Big Bang he would learn the secrets of. The JLA and Avengers teamed up to stop him. Krona summoned mind-controlled villains from both worlds to hold back the heroes. He was defeated when the Flash and Hawkeye (who were previously thought dead) appeared, and Hawkeye fired a powerful explosive arrow into Krona's power source while Flash distracted him.

Later on, Captain Marvel tried to kill himself, sending Rick into unconsciousness due to their symbiotic relationship. Entropy then went on to reveal that he was the offspring of Eternity, and that he was out to destroy the universe and wanted Marvel's help. 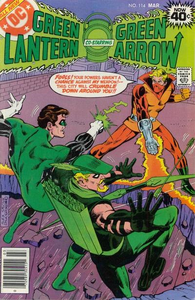 Retrieved from "https://villains.fandom.com/wiki/Crumbler?oldid=2786817"
Community content is available under CC-BY-SA unless otherwise noted.