Leader of the Jupiter Empire

Wipe out all Earthnoids.
Kill Tobia (all failed).

Crux Dogatie (Japanese:クラックス・ドゥガチ) is the primary antagonist of the manga Mobile Suit Crossbone Gundam. He is the tyrannical leader of the Jupiter Empire, originally sent to the Jupiter region to develop space colonies, he and his crew were abandoned by the Earth Federation, thus forcing him to build the Jupiter Empire all by himself, this, together with the political marriage arranged by the Earth Federation, planted a deep hatred towards the Earth in Dogatie's mind, making him to desire to destroy Earth as revenge. He is the pilot of EMA-010 Divinidad.

In the video game G Generation F, he is voiced by the late Ichirō Nagai, while in G Generation Spirits and later on, his voice actor changed to Mugihito.

Crux rules the Jupiter Empire with an iron fist, as he strictly controls everything in the Jupiter Empire, including population, this cruelty is reflected by his wife's kindness, which made Dogatie hate the Earth even more. He had a deep hatred towards the Earth, as a result, he wished to make the Earth unhabitable in order to prove that Earth isn't necessary for mankind and for his revenge. In order to achieve this, he is perfectly willing to sacrifice his daughter. Crux is also manipulative, pretending to be a friendly neighbor towards the Earth Federation to lower its alertness and lied to his people that his goal is to take the Earth's resources as theirs. His obsession with destroying Earth is so great that he saw the illusion of the Earth burning before his death.

Crux Dogatie is one of the first colonists that is sent to Jupiter to develop. However, the Earth Federation didn't offer any helps to him despite Jupiter being a harsh environment. As a result, Crux has to develop the Jupiter Empire all by himself, which takes seventy years, which made him hate the Earth Federation. His hatred only got worse when the Earth Federation proposed a political marriage to him when he is over eighty years old in order to control Jupiter.

In order to succeed in his revenge on Earth, he presents himself and the Jupiter Empire as peaceful in order to gain the trust of the Earth Federation. In reality, he spread the idea of destroying the Earth Federation and taking over Earth to his people. However, this is too a lie, as what Dogatie wanted is to destroy all life forms on Earth, which is something only known by high-ranking members.

Dogatie made his first appearance when Kincade and Tobia raid a Jupiter Empire base and acquired the information of Dogatie's hideout, which is a headquarter on Io, one of the moons of Jupiter. Despite the effort of Jupiter Empire's heavy defense, Kincade and Tobia still managed to raid the headquarter, however, the Dogatie is nothing but a decoy, which awakened the nine bio-brains of Dogatie. The Bio Dogatie than revealed that the main force of the Jupiter Empire is already heading to Earth just before activating the headquarters' self-destruction system even though there are a lot of Jupiter Empire soldiers in it. Luckily, the self-destruction system was stopped by Dogatie's daughter, Bernadette Briett. Tobia and Bernadette are soon kidnapped by Jupiter Empire and are brought to a Jupitris-class ship, where Dogatie is located. She asks her father to stop the invasion of Earth. However, Dogatie told her his true plan and he never loved her and only use her to calm down the people. Much to Bernadette's horror. Dogatie also shows his nine bio-brains units to them, which is all identical.

Tobia is soon able to escape, but Bernadette is forced to stay. Dogatie and his forces than arrives Earth and manipulated the Earth Federation to believe that Crossbone Vanguard is the invader, he even forced his daughter to be the pilot of Elegolea, which is in reality piloted by Dogatie's bio-brain without caring about the possibility that she might end up getting killed and even said that if she died, their morale will be boosted.

In the end, the real Dogatie and his bio-brains piloted the EMA-010 Divinidad to face the Federation army, at first, the Divinidads have the upper hand, however, the space colonies, being aware of Dogatie's threat, send their army to assist the Federation, overwhelming and destroying the Divinidads. In the end, the real Dogatie and Tobia dropped to earth, and after a tough battle, Tobia lost all of his weapons, and when Dogatie is ready to kill him with the mega particle cannon, Tobia crashed the Crossbone Gundam X-3 into the cannon with I-field being turned on at the highest output, Tobia ejected, and the Divinidad heavily damaged itself as the Gundam reflected the beam back to it.

In his final moments, Dogatie sees the illusion of the Earth burning, which, in reality, is the burning cockpit of Divinidad. Tobia is than rescued by Kincade, who used the screw whip of the Crossbone Gundam Kai to pierce the remain of Divinidad's cockpit, killing Dogatie once and for all. With Dogatie's demise, peace is finally achieved for some time.

Despite of Dogatie's demise, his ideal, just like the one of Gihren's, would greatly haunt the Universal Centry for years, influencing the likes Callisto's Light and later Fonse Kagatie. 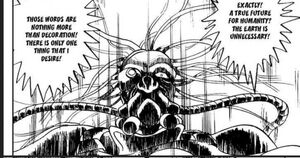 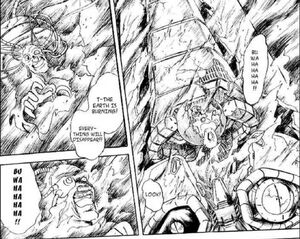 Dogatie seeing the illusion of the Earth burning. 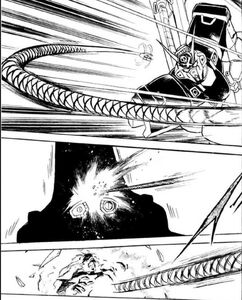 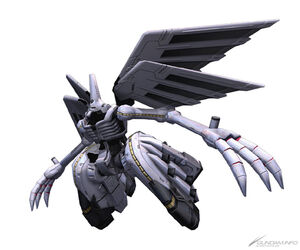