Villains Wiki
Register
Don't have an account?
Sign In
Advertisement
in: Articles under construction, Urban Legends, Noncorporeal,
and 17 more

The Crying Boy is a mass-produced print of a painting by Bruno Amadio, which has been widely distributed since the 1950s. There are numerous alternative versions, but all depict a sad and crying child.

In 1985, several suspicious house fires in England were investigated, and at each site everything had been destroyed except for a painting titled "The Crying Boy." On September 4, 1985, a British tabloid newspaper reported that firefighters had been finding similar paintings untouched at the scene of mysterious fires. One firefighter who was interviewed stated that no firefighter would allow a copy of the painting into his own house. Over the next few months, The Sun and other tabloids ran several more articles. By the end of November, belief in the painting's curse was widespread enough that mass bonfires of the paintings were organized.

The picture itself was discovered to be a portrait of an orphan child, and it is said that the artist's studio burned to the ground and the orphan was killed in a car crash shortly after The Crying Boy was painted. According to urban legend, the curse only affects someone if the owner of the painting becomes aware of it, and the only way to lift the curse is to give the painting to another person, or to reunite the boy and girl variations of the paintings.

Steve Punt, a British writer and comedian, investigated the curse of The Crying Boy in a radio production called Punt P.I. Although the program is comic in nature, Punt researched the history of the Crying Boy painting and revealed an intriguing past. The conclusion reached by the program, following testing at the Building Research Establishment, is that the prints were treated with varnish containing fire repellent, and that the string holding the painting to the wall would be the first to burn and result in the painting landing face down on the floor where it would be safe.

This explains the painting's survival in the fires, but it does not yet explain how the mysterious fires were started. There are still several hundred of these paintings in circulation. 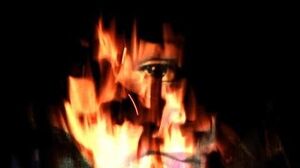