Making Kaijus do their bidding

The Cryog are a race of shapeshifting aliens who are the main antagonists of the IDW comic series Godzilla: Rulers of Earth. They are initially commanded by Rhizon before Emperor Karkaro usurps control of the invasion from him. The Cryog hail from an unnamed homeworld which was destroyed by King Ghidorah, and seek to conquer the Earth as their new home planet. They initially aligned themselves with the underwater-dwelling Devonian civilization, but found themselves betrayed by their allies. Nevertheless, they quickly recovered from this betrayal after the Devonian were wiped out by Godzilla and the human military.

The Cryog rely on their control over various kaiju to carry out their invasion. Gigan serves as their vanguard monster, while Orga is also under their control. They construct an army of mass-produced Mechagodzillas and even converted another King Ghidorah into the cybernetic Mecha-King Ghidorah.

The Cryog are squid-like in appearance, with several tentacles that serve as their arms and legs. They have triangular-shaped heads with two eyes and a mouth, and stand upright like humans. The Cryog's most unique ability is to change their shape into any lifeform they desire. Their commander Rhizon used this ability to take the form of a Devonian as well as a human.

Destruction of the Cryog Homeworld

The Cryog once inhabited a technologically advanced civilization on their home planet, ruled by Emperor Karkaro. This all changed when the spacefaring demon King Ghidorah arrived on the planet and razed it to the ground. Few Cryog survived the attack, but those that did joined Commander Rhizon in the search for a new planet.

The Cryog's quest eventually led them to Earth. They found their monster servant Gigan on the planet following battles against Earth's kaiju which left him badly damaged. The Cryog recalled Gigan and repaired and upgraded him. In order to eliminate the humans and monsters inhabiting the Earth, the Cryog joined forces with the underwater-dwelling Devonian civilization, which also held designs on conquering the planet. Rhizon intended to betray the Devonian after they had outlived their usefulness. The Devonian unleashed the various monsters they controlled, including Gezora, Manda, and Destoroyah, in order to eliminate both humanity and the planet's strongest guardian: Godzilla.

The Cryog sent the new-and-improved Gigan to recover the Millennian UFO from Area 51, after which the monster and the ship assaulted Las Vegas. Godzilla arrived to challenge Gigan, but was subdued during the battle long enough for the UFO to absorb his DNA and form the monster known as Orga. MOGUERA arrived to back up Godzilla, but was badly damaged in the battle. Jet Jaguar flew to Vegas as well and forced himself down Orga's throat, growing to gigantic size and causing Orga to explode from within. Godzilla and the giant Jet Jaguar teamed up to double-team Gigan, severing his tail and beating him into submission until Rhizon was forced to recall him. Rhizon sent a second ship to recover Orga's regenerating remains and recalled it as well. The Cryog beamed CKR's Steven Woods and Chavez aboard their ship and attempted to kill them, but Jet Jaguar came aboard the ship and helped them fight their way out.

Eventually, the Devonian unleashed their latest creation, Biollante, to betray the Cryog and destroy their ship. Rhizon survived the betrayal and disguised himself as a Devonian to pose as a defector and help the humans destroy the Devonian. A military attack on the Devonian capital supported by Godzilla, Kiryu, and Jet Jaguar succeeded, and the Devonian were wiped out. Rhizon quickly revealed himself to the human scientist he had been cooperating with and killed him.

Rhizon next disguised himself as a Russian businessman named Dyachenko and recruited the evil psychic twins Minette and Mallory to his cause. He located a comatose King Ghidorah in Japan and had Gigan sever his middle head so that he could take control of him, and converted him into the cybernetic Mecha-King Ghidorah. Dyachenko also constructed an army of mass-produced Mechagodzillas under the guise of selling them to different countries to defend themselves from monsters. When Godzilla, who had been presumed dead after vanishing in the final battle against the Devonian, reappeared in Boston, Dyachenko sent his Mechagodzilla army there to kill him. Godzilla fought off the Mechagodzilla army before being abducted by Mecha-King Ghidorah, who was being telepathically controlled by Minette and Mallory. Ghidorah deposited Godzilla at the Dyachenko robotics factory in Siberia, where he was forced to battle him as well as more Mechagodzillas. Fortunately for Godzilla, his ally Anguirus arrived at the plant as well and helped Godzilla to dispatch the Mechagodzillas and damage the controller for Mecha-King Ghidorah. Ghidorah's organic heads regained control over the body and the monster subsequently retreated into outer space in search for more of his kind.

After SpaceGodzilla's attack, the Cryog witnessed a meteor fly past their ship. Knowing what this meant, he demanded that the other ship near his reveal itself. The Cryog Mothership soon uncloaked itself to Rhizon. Emperor Karkaro and his imperial guard boarded Rhizon's ship and took him and his crew prisoner. Karkaro scolded Rhizon for betraying him by taking command of the Cryog, and accused him of being incompetent in his invasion. Karkaro revealed his trump card: an army of genetically-engineered creatures called the Trilopods which would assimilate and eliminate all monsters on Earth and conquer the planet for good.

The Trilopods were deployed to the planet's surface, where they quickly copied the abilities of the native kaiju and captured them one-by-one, eventually depositing them in their massive hive which touched down in Los Angeles. Karkaro had Rhizon brought aboard the Mothership, then destroyed Rhizon's ship with all of its crew aboard. Karkaro promised that he would keep Rhizon alive long enough to witness the conquest of Earth before executing him for treason. Rhizon told Karkaro that in destroying his ship he had unwittingly unleashed Gigan, who was no longer under anyone's control.

Godzilla prepared to face down the full force of the Trilopod swarm in Los Angeles, but was joined by Kiryu and MOGUERA. During the battle, the two mechas were destroyed while King Caesar freed himself and the other Earth monsters from the Trilopod hive. The Earth monsters then joined forces against the Trilopod army, and began a fierce battle. Meanwhile, Gigan assaulted the Cryog fleet. During the attack, Rhizon grabbed Karkaro and held him hostage. He told him that neither of them would leave the Earth alive, and that by summoning all the Trilopods to Los Angeles, he had doomed them to defeat. Karkaro replied that he had summoned the Earth monsters there to be food for Magita, then pressed a button that fired a laser at the Trilopod hive and unleashed the giant Trilopod Magita. Gigan breached the Mothership's hull with his chainsaw, after which Rhizon threw Karkaro into it, killing him. He then took command of the ship and rammed it into Magita, weakening it long enough for Godzilla to absorb a huge amount of energy and obliterate the creature with his spiral heat ray and a nuclear pulse.

Sometime after the battle, Gigan and a Mechagodzilla were being repaired in an undisclosed location. 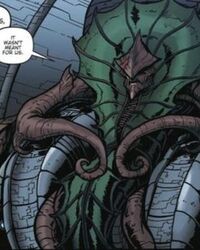 Rhizon is a Cryog commander. When the Cryog homeworld was destroyed by King Ghidorah, Rhizon led the search for a new habitable planet. Rhizon is ruthless and scheming, immediately intending to wipe out mankind and to betray the Devonian, however he seems to genuinely care for the wellbeing of his race. When Karkaro took over the invasion from Rhizon, Rhizon actively worked against him and helped ensure the invasion would fail. 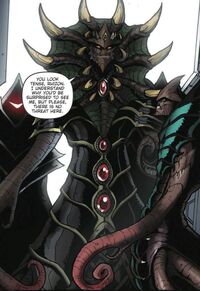 Karkaro is the Emperor of the Cryog. When King Ghidorah destroyed the Cryog homeworld, Karkaro disappeared and was presumed dead by Rhizon. When he learned Rhizon had taken over the Cryog, Karkaro became enraged and set out to humiliate his former underling by completing the invasion of Earth himself before executing him. Karkaro is even more evil than Rhizon, callously destroying his ship with his entire crew on board.