Tales from the Crypt

Host and narrator of the Tales from the Crypt franchise

He is voiced by John Kassir, who also played Sweetcheeks in Johnny Bravo, Scuttlebutt in An American Tail: The Treasure of Manhattan Island, Lardak Lurdak in Buzz Lightyear of Star Command, the Mad Hammer Bros. in My Life as a Teenage Robot, Cryptic Chameleon in Maya and Miguel, Duncan in Danger Rangers, Zombozo in Ben 10, Art the Clown in Dead Rising, Scorpion 2099 in Spider-Man: Shattered Dimensions, Jealousy in The Amazing World of Gumball, Monsoon in Metal Gear Rising: Revengeance, Dark and Dave Beavers in TMNT 2012 and General Fallon in Jack the Giant Slayer. In the 1972 film, he was portrayed by the late Sir Ralph Richardson.

The Crypt-Keeper isn't much of an antagonist in the scope of the series, but his appearance and evil laugh is a signature to the movie adaptations. However, in several of the episode bookends, he is shown torturing and killing some unfortunate humans that he has come across rather than the usual skeletons seen in his crypt.

In the comics and movie he is the host, telling stories he proclaims "needed a lighter touch". In the comics he is the son of a two-headed freak and an ancient mummified woman. In addition to being a sadist, he also shows masochistic tendencies, such as resolving a headache by having his head cut off.

His appearance consists of him having dry and mummified face, white hair and a low-pitch laugh. In the movies he always stars as the main character and in one scene, he appears in the red carpet as a celebrity, only to get his head cut which he calls "the final cut". 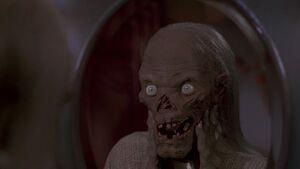 The Crypt-Keeper's cameo in Casper. 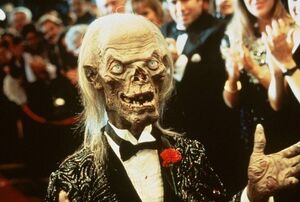 The Crypt-Keeper as a celebrity. 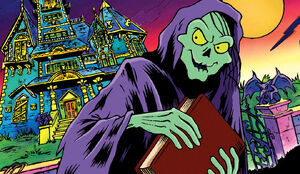 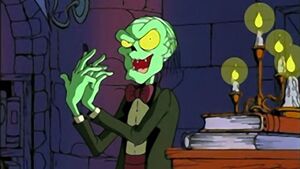