Asterix and the Vikings

Capture the champion of fear (succeeded).

Have his son become chief.
Kill Asterix, Justforkix, Obelix and the Vikings (all failed).

Arrogant Manipulator
Cryptograf is the main antagonist of the 2006 French-Danish animated film Asterix and the Vikings (also known as Astérix et les Vikings in French). He is the soothsayer of Timandahaf.

He was voiced by Pierre Palmade in French and Greg Proops in English.

Cryptograf is first seen when Timandahaf enthusiastically concludes that they must find a "Champion of Fear", who can show them how to be great cowards so that they are able to fly, making them too powerful to be defeated. The chief that says he will give anything to whoever can bring him this Champion of Fear. He hatches a secret plan to take control by having his son Olaf marry Abba, Timandahaf's daughter, and tells the chief that they will find the Champion of Fear in Gaul.

Meanwhile, Asterix and Obelix begin to train Justforkix. However, they have little, if not any success. He runs screaming from any danger and is not ready to drink potion. Upon the Vikings' arrival in Gaul, Cryptograf explains to his buffoonish son named Olaf, that he must capture the Champion of Fear, and claim the prize of anything he wants. Since the chief does not have a son, this would put Olaf under control to become the next chief.

Justforkix is then captured by Olaf, so Asterix and Obelix must retrieve him before the next full moon when Doublehelix intends to return to their village. Asterix and Obelix reach Iceland soon after the Vikings, but they are unable to save Justforkix. He does not want to leave because he considers the Vikings as his friends, but the Vikings come in a resolution in the mind to reveal Justforkix's flight by throwing him off of a cliff. Cryptograf rigs up a rope to Justforkix in a secret way, allowing him to be officially prohibited in the fog and thus convincing the Vikings that he is really able to fly.

The vikings then go to fly themselves, only for Cryptograf to remind them that they need to attend Abba and Olaf's wedding first. Justforkix eventually manages to get to the wedding and manages to get away with Abba. Cryptograf then orders Olaf to kill him.

After Olaf fails to kill Justforkix, and after Justforkix tells Abba that he can't actually fly, Cryptograf and the other vikings catch up to them. Abba then exposes Cryptograf (with Olaf explaining how he made Justforkix "fly" while confused), followed by Timandahaf throwing Cryptograf off the cliff. However, Cryptograf then pulls down Abba and Justforkix with him. The two manage to escape, and Cryptograf is left hanging onto a ledge. It's unknown if Cryptograf was ever rescued, but it's likely that fatigue eventually overcame him and he came off the ledge, falling to his death. 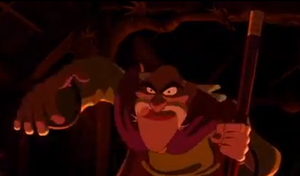 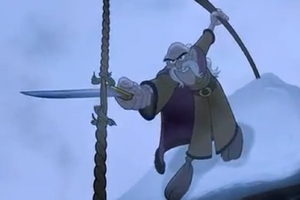 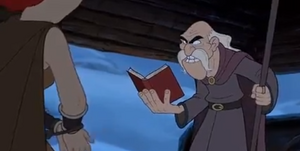