Soldier of the Furon Empire

Improving his weapons.
Destroying all humans.

Find and kill Emperor Meningitis for "killing" the Master.

Cryptosporidium, also known as Crypto, is the main villainous protagonist of Destroy All Humans!, along with its sequels. He is actually one of many clones, and exists to harvest human DNA in order to ensure the survival of his own species. Throughout the game, he is given increasing levels of power and ultimately ends up becoming the new President.

He was voiced by J. Grant Albrecht and Sean Donnellan.

The game is set in the 1950s and parodies the Cold War era hysteria, as well as B-movies. In fact, when Crypto is spotted by certain humans, they call him a "Commie", suggesting that, despite his hideous appearance, these people actually believe his is a Communist rather than an alien.

Crypto is knowledgeable, but also a very comical character in the sense that he has little real knowledge on humanity, although he is quick to express his dislike of them, which is not surprising considering he is part of a warlike species who are already in possession of advanced weaponry sufficient to destroy entire cities.

Crypto talks in a very slow and emotionless Texan accent. He also hates being called green, since he's clearly grey.

As Crypto, the player has an arsenal of such weaponry to utilize against the humans (both innocents as well as such enemies as the military and Men In Black). When his weapons fail him, Crypto can enter his large flying saucer and use it to destroy anything in his path, though the more mayhem Crypto causes, the more humanity will fight back and alert more powerful enemies to his location.

Crypto is responsible for detonating an atom bomb at a high-scale military base, the equivalent of an Area 51.

At the end of the second game, Cryptosporidium-138 has intercourse with "the love of his life", a human KGB spy named Natalya Ivanova. In the third game, Crypto discovers that he'd somehow gotten her pregnant, as he finds out that he has a half-human, half-Furon son named Blastomycosis. 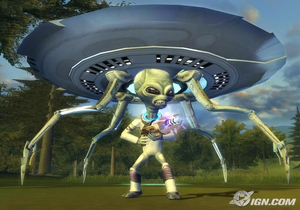 Retrieved from "https://villains.fandom.com/wiki/Cryptosporidium?oldid=4367015"
Community content is available under CC-BY-SA unless otherwise noted.