Guard of the mine

Kill everything that enters the Crystal Mine.

The Crystal Guardian is an optional boss in Hollow Knight. He was once a miner working in the Crystal Mines of Hallownest, but has somehow been partially enclosed by the same crystals he mined, resulting in him going mad and attacking bystanders who enter the mines.

The Crystal Guardian is first found in the middle of the Crystal Mines, resting on a bench. He will not attack unless attacked first. Crystal Guardian attacks by shooting lasers from his crystallized hands, but he can also screech, which releases lasers from a multitude of crystals located above the room, which rain down simultaneously after his roar. The Crystal Guardian telegraphs his attacks with a thin beam of white light a second before the laser shoots out.

Once he is defeated, his crystal armor breaks apart, but he jumps into the roof into the room above, which cannot be accessed until the Monarch Wings are obtained from the Ancient Basin. In the rematch in the room above, the Crystal Guardian, or Enraged Guardian, behaves more aggressively, summoning more lasers when he roars, and his laser targets the Knight more accurately. His lasers also deal two masks of damage per hit in contrast to one in the first battle. Defeating the Crystal Guardian again kills him for good, unlocking a gate containing a Mask Shard. 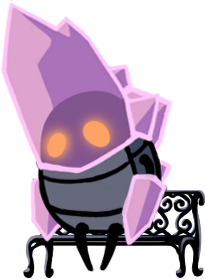 Crystal Guardian resting on his bench.

Crystal Guardian with his armor shell broken.
Add a photo to this gallery 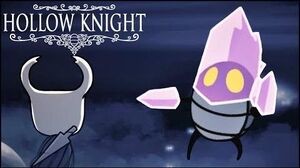 Retrieved from "https://villains.fandom.com/wiki/Crystal_Guardian?oldid=3748160"
Community content is available under CC-BY-SA unless otherwise noted.