Ruler of the Crystal Palace

Defeat Mario and bring him to Bowser as an "iced Mario gift". (Failed)

The Crystal King (Japanese: パラレラー, Pararerā) is a minor antagonist from Paper Mario, appearing as the main antagonist of Chapter 7.

The Crystal King works for Bowser and guards Kalmar, the seventh Star Spirit. He took over the Crystal Palace. The White Clubbas were afraid of getting him angry, and would apparently rather be killed by Mario then by him.

In the credits parade, two Duplighosts imitated the Crystal King, only to be revealed by the real Crystal King, before he is lifted away by the Crystal Bits. The Crystal King has 70 HP, an attack power of 5, and 2 defense. He has three Crystal Bits which can be killed by one attack. He will spit any Crystal Bits he has at Mario for 4 damage each. The easiest way to defeat him it to destroy two of the Crystal Bits, because if all three are gone, he will use an ice beam to freeze Mario. After a while, he will stop summoning Crystal Bits and start using the ice beam. The freezing effect can be guarded against with "A". The Crystal King can also split into three, in which the two fakes will only disappear if the original is attacked. He can also heal for 20 HP, twice.

The Crystal King also makes an appearance in issue 27 of the Japanese-published Mario manga series Super Mario-Kun. Before the fight, the Crystal King announces his presence using Ice Bolt by freezing Kooper. The Crystal King borrows his attacks from the original game such as hurling Crystal Bits and creating duplicates of himself. After an assortment of attacks, including Mario's using smelly clothing, Kooper uses a flaming shell to defeat the Crystal King. 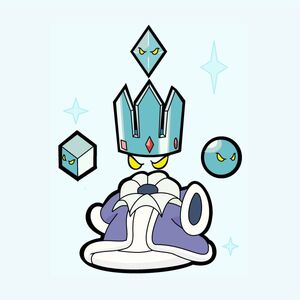 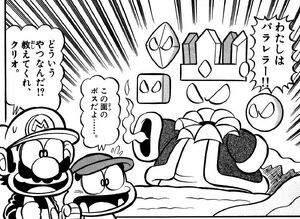 The Crystal King as seen in Super Mario-Kun.