Cthulhu is the main antagonist of the 2020 science-fiction thriller/horror film Underwater.

In the film, Cthulhu has been reinterpreted and simplified as a very large organism, and has no known supernatural powers, sapience, or extraterrestrial origins. Nor does the sight of him invoke madness and insanity in the other characters. In the plot, Cthulhu is the alpha creature to a large swarm of underwater spawns, possibly Deep Ones or Xothians, but also never named in the film. He seems to behave with normal animalistic instincts, with no true malice. He acts as a kind of guardian of the abyss.

Cthulhu appears only towards the end of the movie. He begins destroying the underwater station where the protagonists are stationed. As the huge sea creature wreaks havoc, the other creatures pursue the human survivors in escape capsules in an attempt to destroy them. Norah, the protagonist, feeling doomed, sacrifices herself to destroy the creatures, by increasing the energy level in the station's reactors and causing the station to meltdown, hoping the explosion would kill all creatures, including the gigantic monster that was just beginning to extricate himself from the station. Although the explosion successfully engulfs the creatures, allowing the escape capsules to reach the surface, news reports reveal that Tian Industries has silenced all testimony from the survivors, withheld all details of the incident, and will resume operations, foreshadowing that the company has been aware of the creatures, and will continue to pursue them.

Due to being reinterpreted from an abstract cosmic entity to a creature with a corporeal organic form, Cthulhu can be perceived with the naked eye by humans.

Cthulhu maintains most of his consistent characteristics that have become iconic among Lovecraft fans and writers. He is as large as a mountain, has a grotesque, vaguely humanoid upper body (unseen lower body), and a head with octopus-like characteristics. He has an elongated skull with four eyes, a chin covered with a beard of tentacles, and a jaw that displays many layers of fangs and teeth and a lower jaw that appears to split in two. He has protrusions around his body that resemble emaciated bone-like wings. 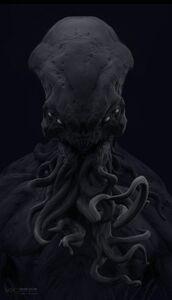