Leader of the Cult of Cthulhu

Defeat those who oppose Cthulhu.

The Cthulhu Cult Leader, possibly named Jim McElroy, is a minor antagonist from South Park. He is first seen buying lemon bars off of the kids in their superhero personae. He tells them that their efforts to stop Cthulhu are futile, and compliments them on the lemon bars.

The cult leader later shows up in an alley after Mysterion (revealed to be Kenny) asks the goth kids about a passage in the Necronomicon. One of the goth kids brandishes a switchblade, and the leader instructs him to kill Kenny with it. He does not want to, so the leader takes the knife and stabs Kenny himself.

He is not seen again after this, nor is it mentioned what happened to him.

The Cult of Cthulhu meetings are said to be held at Jim McElroy's house, this could be the cult leader's name. His goal of worshiping Cthulhu will bring the dark lord out of his sleep, so as to rule the Earth as it was foretold in the Necronomicon.

The cult leader appears to be a man in his early to mid 40's. He has a large nose and usually has a strange, almost unsettling smile on his face. He wears a collarless dark blue button-up shirt under a brownish gray jacket, yellow pants with a black belt, and black shoes.

His hair is shaved on the sides and back, but longer at the top, giving it an appearance similar to that of a bowl cut. It is parted in the middle. When conducting cult meetings, the leader wears a black hooded robe with a white anarchy symbol on the left breast. The hood of the robe covers half of his face. 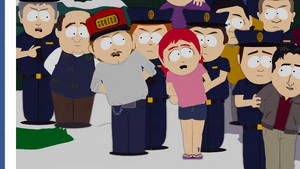 Kenny's parents and the cult leader being arrested in October 2000. 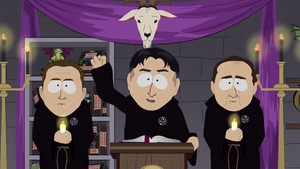 The leader, and two of his followers, at the cult meeting. 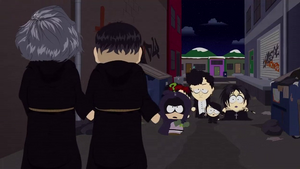 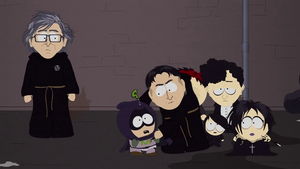