The Transition of Titus Crow by Brian Lumley

Give birth to her father Cthulhu when he dies.

Cthylla (also known as the Secret Daughter of Cthulhu) is the daughter of one of the Great Old One known as Cthulhu and an antagonist in the Cthulhu Mythos of the late H. P. Lovecraft.

Cthylla was mentioned in Brian Lumley's 1975 Titus Crow novel The Transition of Titus Crow, though he never actually described her. However, Tina L. Jens depicted Cthylla as a giant winged octopus in the 1997 short story "In His Daughter's Darkling Womb".

Cthylla is a Great Old One and is the youngest progeny of Cthulhu and his androgynous mate Idh-yaa. She came from the star Xoth, but now dwells on Earth in Yhe where she is guarded by Cthulhu's minions. Cthylla is destined to give birth to Great Cthulhu again when he is destroyed in the distant future. She is essential for Cthulhu's plans, and is thus vigilantly guarded by countless Yuggya and Deep Ones.

Cthylla was not physically described by Lumley, but was featured in Tina L. Jens's short story In His Daughter's Darkling Womb. Cthylla has the appearance of a gigantic, red-bodied, black-ringed, and six-eyed octopus with small wings. Like her father, she is able to alter her body proportions at will, such as by enlarging her wings to enable her to fly. While she normally has eight arms like any octopus, she can extrude or retract additional ones at will (she has been known to sport as many as twelve arms). Each arm is equipped with dozens of razor sharp claws, each about five inches in length.

Jens' short story narrates the capture of Cthylla by researchers who mistakenly believe her to be a rare specimen of a previously undiscovered octopus species. For the sake of preserving and studying the species, they then attempt to impregnate her through artificial self-insemination.

In Peter Rawlik's 2011 story "In the Hall of the Yellow King", Cthylla instead features in a way more humanoid form or avatar as possible bride for Hastur. 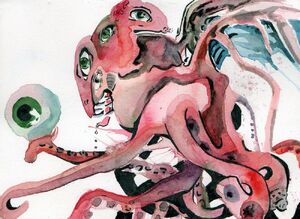