Retracting into a cube

Cubot, is one of Dr. Eggman's assistant robots next to Orbot and a supporting antagonist in the Sonic the Hedgehog series. Cubot isn't as intelligent as his friend Orbot and his voice chip tends to malfunction. Eggman always tries to fix it but with no luck.

He appears as one of the two secondary antagonists (alongside Orbot) of Sonic Colors and the Sonic Boom TV show, a minor character in Sonic Generations, a supporting antagonist in Sonic Forces and Sonic Lost World, and a major antagonist in the IDW Sonic the Hedgehog comics.

He was voiced by Wally Wingert.

In Sonic Colors, Cubot and Orbot assisted Dr. Eggman in his scheme to enslave the world with a mind control cannon by capturing the Wisps from their planets in Dr. Eggman's Amazing Interstellar Amusment Park and harvesting their Hyper-Go On Energy. At some point prior, Cubot received a new voice chip to replace his old voice, but occasionally gets stuck with different accents.

Before the opening day of the amusement, Cubot and Orbot were out trying to capture Yacker and a Cyan Wisp until Sonic arrived and saved the Wisps. Later, Orbot and Cubot presented the Wisps they had caught to Eggman and were just sent out to get more when Sonic had arrived. After the Rotatatron had been released and destroyed, Cubot and Orbot were sent to clean up the robot's remains. Though they were unable to find Rotatatron's arm, Cubot was unconcerned, not aware it had been jammed into Eggman's mind control cannon.

Following that, Cubot continued working on his voice, but without much luck. When the mind control cannon was ready, Cubot watched Eggman activate it, only for it to backfire due to the Rotatatron's arm being stuck in it. As Eggman was in denial of what was happening, Cubot remarked that Sonic always foiled his plans. Cubot was then praised by Orbot for being attentive by getting a slap in the back, which gave Cubot his original voice back. When Eggman then faced Sonic in his Nega-Wisp Armor and was defeated, Cubot was pulled with Eggman and Orbot into a temporarily black hole created by the mind control cannon. Now stranded in outer space, Cubot and Orbot began helping Eggman get back to civilization by pushing him in his trashed Egg Mobile through space while Cubot continued to talk endlessly about a random number of subjects.

While Cubot never makes an actual appearance, in a flashback, Dr. Eggman abandons him and Orbot in space so he can use the Time Eater to change history.

After the Deadly Six rebel against Eggman (thanks to Sonic getting rid of a conch shell that he was using to keep them in line), Cubot loses his body, leaving him nothing more than a still-functioning head (who reverts to talking like a pirate yet again), though Tails fixes his voice after the group returns to Eggman's base.

Later on, Orbot complains that he got tired of carrying Cubot's head, and builds him a snowman's body. Cubot complains that he can't feel his legs (despite not even having any in his original form). However, Tails decides to help by attaching his head on a Crabmeat's body, which proves to be a mistake as the Badnik was controlled by the Zeti, thus turning Cubot evil. Eggman saves Tails from Cubot, who ends up decapitated again by Sonic (he then apologizes, saying he "suddenly felt very mean".)

After Tails was captured by the Deadly Six and Sonic discovers from Zavok what they plan to do, Cubot is revealed to now be permanently attached to Orbot's body by Eggman, the latter who finds it irritating.

In Lava Mountain, the super-powered Deadly Six attack Sonic, Eggman and Orbot/Cubot. The latter three plummet to their (supposed) deaths, but Eggman rescues the bots during his faked death.

After the end credits, Orbot and Cubot discover Eggman stuck in the dirt and get him out, but Cubot sees that half of Eggman's mustache is torn off. Orbot shuts him up, preferring that Eggman detaches his head so that Cubot will get the blame ("glory" as Orbot explains) on telling him about his mustache.

Cubot serves a minor role and only has one or two lines in the whole game, although he is shown to have had his body rebuilt between games. He is also shown cleaning the Mystic Jungle base and using his eyes as projectors to show Eggman videos, Battle plans and other strategic information during the war.

Cubot is one of the secondary antagonists along with Orbot in the TV series. 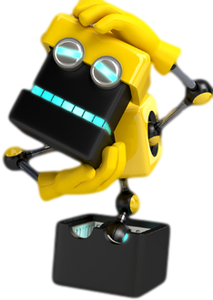