Magic monster, being a Queen for the people

Eating kids, Slaying the runway, Snatching edges, and generally making them eat "it".

Eat the children and another goals (being fierce)

Man-Eating Witch
Cuca is a recurring antagonist of the Brazilian novel books of Sítio do Picapau Amarelo (Yellow Woodpecker Ranch) written by the late Monteiro Lobato. Based on a Brazilian folklore legend's character she is a witch who kidnaps and eats naughty children. In the books she marked her first appearance to kidnap one of the protagonists in one of the chapters of the book "O Saci" in 1921 (in that book, she is one of various villains of Brazilian folklore, but when this book became a movie, named "O Saci" in 1951, Cuca appeared in it as the main antagonist).

Her iconic appearance is best remembered in popular culture from a TV series adaptation produced in 1970. In this version she became incarnated as an anthropomorphic alligator with blond hair, acting as the main villain in the story.

With the success of this adaptation in the TV series, Cuca returned in all other adaptations of Sítio do Picapau Amarelo, including the 2001 and 2008 version and the cartoon series in 2012 (and in a comic book launched between 2006 and 2008, based in the 2001 version, the most famous version in the XXI Century, and because this, inspired the cartoon series).

Although in the books she is shown as a serious and cruel witch, in the TV adaptations Cuca has an angrier and incompetent personality. She can be considered a bogeyman for always abducting children to devour them, but can never eat anyone. She also shares a rivalry with Emília the Ragdoll, one of the main characters who often foils her plans. 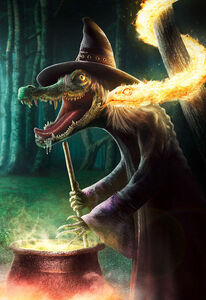 The Cuca from the Brazilian folklore. 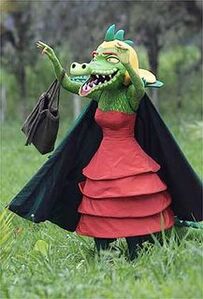 The original appearance of Cuca in the 2001 show. 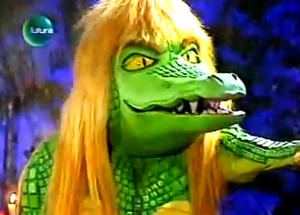 Cuca as she appears in the 2003 live action show. 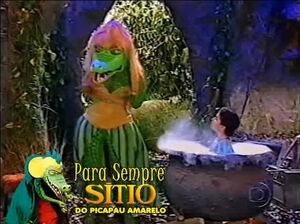 Cuca cooking the boy Pedrinho in a pot 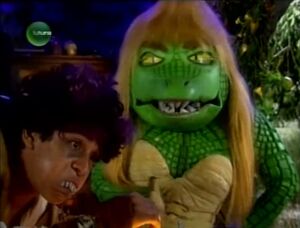 Cuca and her henchman Pesadelo 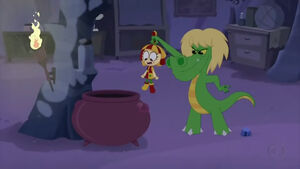 Cuca about to throw Emilia into her pot
Add a photo to this gallery
Retrieved from "https://villains.fandom.com/wiki/Cuca?oldid=3912863"
Community content is available under CC-BY-SA unless otherwise noted.