Cuckoo Clocker is a minor antagonist and one of the trappable villains in Skylanders: Trap Team. A Life element trap is required to trap him.

However, the Skylanders defeat him, lock him in a Life element trap and save the Phoenix Chicken. But Pepper Jack escaped and caught the one egg to prepare the Omelet of Spicy Doom which is a bomb.

Cuckoo Clocker absorbed into the vortex 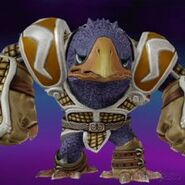