Manipulate SpongeBob and get him to make the residents of the Krusty Krab to eat rotten Krabby Patties so they can see him and he can eat them. (succeeded)

Cuddle E. Hugs is one of the characters from SpongeBob SquarePants who is revealed to be the main antagonist of the titular episode of the same name. He is an imaginary friend depicted as a cuddly hamster who SpongeBob befriended after eating a rotten Krabby Patty only to be revealed that he hides some sinister intentions behind his sleeves.

He was voiced by Jeff Garlin, who is best known to play some live action roles such as Mort Meyers from Arrested Development and Jeff Greene from Curb Your Enthusiasm and also lending some voice on several animated characters such as Captain B. McCrea from Wall-E, Shirley from the Jimmy Timmy Power Hour 3: The Jerkinators and Buttercup for both Toy Story 3 and 4.

His appearance correlates with his name perfectly as he is depicted as a very tall albeit a rather overweight hamster with a lighter tan stomach with light brown furs surrounding his body with the addition of a rather rosy pink cheese and a small red nose on his face. In addition to all of this, he also has dimples and two front buck teeth which fits his appearance as a hamster. To add to his seemingly innocent and goofy appearance, Cuddle E. Hugs also wears a green hat and a bow tie.

Cuddle E. Hugs initially appears as a rather friendly and goofy imaginary friend who was created by SpongeBob. However, his friendly demeanor is revealed to be nothing but a façade. It was soon revealed that he is a manipulative person who tries to use SpongeBob's friendship in order to make the latter's friends see him before eating them for his own amusement. This was understandable since Cuddle's middle name is revealed to be "Eat" which means he had a penchant on eating someone.

To prove that Krabby Patty is not a food that will never become rotten, SpongeBob decides to eat a bit of said rotten patty which resulted in SpongeBob become nauseous and run outside the restaurant which resulted in SpongeBob meeting with a sweet hamster-like creature called Cuddle E. Hugs. SpongeBob decides to befriend him due to his friendly and cuddly demeanor as they become best friends together, doing several activities while several Bikini Bottom citizens get unsettled and bewildered after seeing the two together due to the fact that Cuddle E. Hugs don't seem to exist in their eyes.

SpongeBob then decides to bring Cuddle E. Hugs to the Krusty Krab so that he could introduce Cuddle to his own friends. However, as they meet SpongeBob's friends during the journey to the Krusty Krab, most of them are unable to see him as Sandy calls out on SpongeBob that Cuddle was just a mere imaginary friend that SpongeBob made. As a result, Cuddle then tells SpongeBob the reason why people are unable to see him is because they didn't eat the old patty SpongeBob had stored. This resulted in SpongeBob convincing the citizens to eat the old patty to see how Cuddle E. Hugs look like.

As the Bikini Bottomites including his friends ate the rotten Krabby Patty SpongeBob gave to them, they ended up having the ability to see Cuddle E. Hugs and managed to hug him like a teddy bear. However, at the same time, Cuddle E. Hugs responded by attacking them and eating them like a maniac. However, in reality, the Bikini Bottomites ended up surviving Cuddle's rampage as they are all suffering from the side effects of eating the rotten patty that SpongeBob had given to them.

As SpongeBob wakes up at the Krusty Krab the next morning, he then decides to confront Cuddle E. Hugs one last time by eating the rotten Krabby Patty and tries to ask why he decided to attack the Bikini Bottomites in the first place by eating them. As both SpongeBob and Cuddle met again, the latter tries to justify his action by saying that his middle name means "Eat" which resulted in him having a penchant on eating the Bikini Bottomites.

When SpongeBob assumes that Cuddle is still hungry after hearing the revelation, he then decides to give him the rotten patty that he had saved for the last much to Cuddle's dismay. As Cuddle ate the last rotten patty, he became nauseous and got transported into a child's bedroom in the real world with several SpongeBob SquarePants products which resulted in him responding "Oh! Pellets." as the episode ends. It is unknown what happened to Cuddle E. Hugs afterwards. 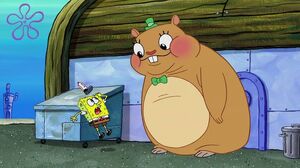 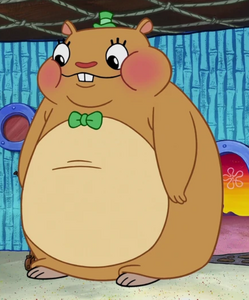 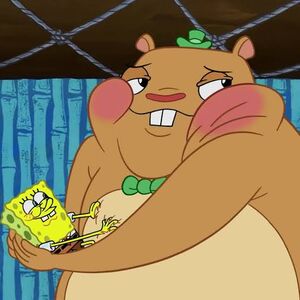 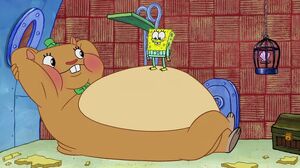 Cuddle being used as a mattress. 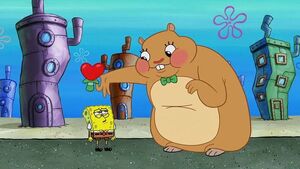 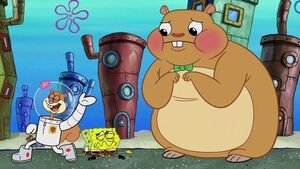 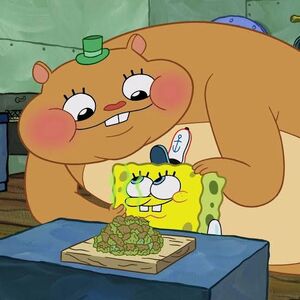 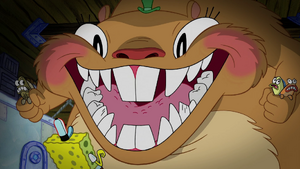