Is ten feet taller than a normal hamster due to consuming Monster Blood (formerly).

Playing in his cage.

Monsterous Mutant
Cuddles is a hamster that ate Monster Blood and grew to about ten feet. His only appearance to date is in Monster Blood II, and is technically the antagonist of the book. He is one of the more popular characters in the series.

Cuddles is owned by science teacher Mr. Murphy, who punishes Evan Ross to clean Cuddles' cage, whom Evan dislikes. To get back at Mr. Murphy for Evan, Andy feeds Cuddles some Monster Blood, but after awhile, he grows to an enormous size, and starts rampaging through the school. Evan eats some Monster Blood himself so that he can grow to Cuddles' size and do battle with him.

However, Cuddles is about to finish Evan off until they both return to their normal sizes. It turns out that the expiration date on the Monster Blood has passed, resulting in the magic wearing off. As a gift, Cuddles is given to Evan. In the end, it is heavily implied that Cuddles ate some more Monster Blood.

Cuddles is briefly mentioned in the Goosebumps series Return to HorrorLand when Derek and Margo Strange interview Evan, and he retells the events of Monster Blood II.

Cuddles appearance in the Scholastic design 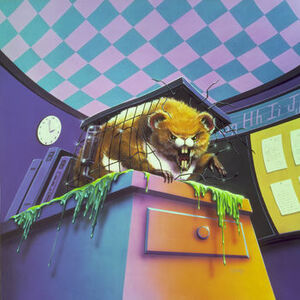 Cuddles appearance on a trading card