Killing, particularly babies after stealing them from their homes

Many-eyed evil being
The Cuegle is a monster in Cantabrian folklore.

Walking on two legs and roughly humanoid in shape (but shorter than a man), it is believed to have black skin, a long beard, grey hair, three arms without hands or fingers, five rows of teeth, a single stubby horn and three eyes in its head: one green, one red, and one blue.

Cuegle are much stronger than humans, being able to kill any man and livestock. Additionally, they can see into the future with their middle eye and into the past with their left eye.

Oak or holly leaves are their weakness, as it finds them repulsive. Since it has a reputation for stealing babies, putting those leaves on the cradle will keep the Cuegle from approaching the baby. 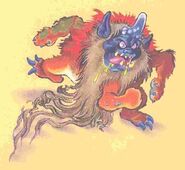 A Cuegle in the series "Grimm".