Enjoying his role as mighty leader.

Cuervo Jones serves as the main antagonist of the 1996 movie Escape from L.A., which is the sequel to Escape from New York.

He was portrayed by Georges Corraface.

He is a power hungry Shining Path terrorist who seduces the President's daughter Utopia and brainwashes her into stealing the Sword of Damocles, which has the ability to shut down the entire world. Snake Plissken is then sent to infiltrate L.A. and retrieve the Sword of Damocles. While at L.A., Snake meets several allies such as Hershe and "Map to the Stars" Eddie.

Snake is also captured by Cuervo and is forced to play a life-or-death game of basketball in which the loser who fails to make a shot or runs out of time is shot to death, in which Snake wins. At the end of the movie, Snake finds him at The Happy Kingdom By The Sea and engages the terrorist leader in a fistfight. Snake defeats Cuervo and snatches the Sword of Damocles. When Snake and his allies attempt to escape by helicopter, Cuervo attempts to shoot the helicopter down with a rocket launcher. "Map to the Stars" Eddie manages to fatally shoot Cuervo but Cuervo successfully shoots down the chopper, incinerating most of Snake's allies in the process and causing Eddie to fall out of the chopper. 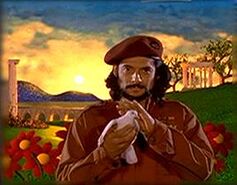 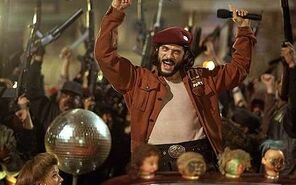 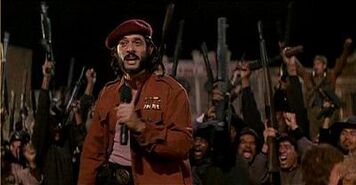 Retrieved from "https://villains.fandom.com/wiki/Cuervo_Jones?oldid=3320450"
Community content is available under CC-BY-SA unless otherwise noted.