Capture all of the pigeons (both failed).

Cufflingk and Underlingk are the two secondary antagonists in the 2005 Disney computer-animated film Valiant. They are Von Talon's minions.

Cufflingk and Underlingk are brutal, dimwitted, and unintelligent minions who work for Von Talon, though Cufflingk has shown to be the more slightly competent of the two while Underlingk is basically dumb through-and-through. They are also shown to take pleasure in capturing pigeons. They are also shown to have a sadistic side, as shown when they are seen preparing to torture Mercury.

In May 1944, 5 years since the declaration of World War II, three Royal Homing Pigeon Service war pigeons are flying across the English Channel with the White Cliffs of Dover in sight, carrying vital messages to Great Britain. Despite the poor weather conditions, the pigeons have nearly reached their destination. However, they are suddenly ambushed and attacked by a villainous German enemy falcon called General Von Talon; two of the pigeons are instantly killed, yet the third, Mercury is taken as a prisoner of war.

Elsewhere, a small white wood pigeon named Valiant is watching an Allied forces propaganda film in his local bar (an overturned rowing boat) in West Nestington. Wing Commander Gutsy, a war hero flies into the bar, informing everyone that signups are scheduled the next day in Trafalgar Square, London. In General Von Talon's lair, Mercury resists interrogation by his captors. Valiant flies off to London, bidding his mother and the local barman named Felix goodbye. In London, Valiant meets a filthy pigeon named Bugsy, who is wanted by the two thugs. In order to escape the wrath of the thugs, he signs up with Valiant.

The recruits Valiant, Bugsy, an intellectual red pigeon named Lofty, and the two strong but dimwitted twin brothers named Toughwood and Tailfeather form Royal Homing Pigeon Service Squad F are sent to a recruit training facility. Under the command of Sergeant Monty, who declares that he will toughen them up for the RHPS, the training begins. Meanwhile, Von Talon and his henchmen, Cufflingk and Underlingk, try numerous attempts to discover the message's departure location. However, Mercury refuses to tell, despite the tortures inflicted upon him, such as irritating him by playing Werner Bruggemann's song "Da Jodel Rudel" over the intercom and injecting him with truth serum, before Mercury accidentally reveals the location by the name of Saint-Pierre.

Throughout the training, Valiant develops a crush on Victoria, the camp's nursing dove. Eventually, Gutsy arrives and tells the Sergeant that the recruits need to leave the next morning, although their training is vastly incomplete. However, Bugsy decides not to go on the "highly dangerous" mission and flees the camp that night. The next morning, Valiant and the others prepare to leave and start to board the plane headed for France, but not before Bugsy shows up at the last second. The journey becomes extremely perilous and vulnerable, as the plane is caught in the midst of dogfight. Their plane sustains heavy damage and the pigeons soon have to bail out, in boxes equipped with parachutes. The pigeons are dropped from the plane; however, a technical malfunction causes Gutsy's box to fail to deploy. The plane goes down in an inferno of flames, presumably killing Gutsy in the resulting explosion.

In France, the pigeons meet Charles de Girl and Rollo, the two mice from the French Resistance, Mouse Division, the latter being an expert saboteur who lead them to Saint-Pierre, where they receive the message that they have been ordered to deliver. They soon come under attack by Von Talon's henchmen, resulting in Bugsy and the message being captured. Von Talon takes the message from Bugsy and decides to cage him up and eat him later. Valiant and the troops follow Bugsy to the falcon's bunker, where they discover that Gutsy has survived the plane crash. Valiant takes advantage of his small size and sneaks into the bunker through the gun barrel, retrieves the message, and frees Bugsy and Mercury. Unfortunately, the falcons are alert and give chase. As Gutsy and the others fend off Von Talon's henchmen, Valiant flies to London to deliver the message, followed closely by Von Talon.

It is unknown what has happened after Cufflingk and Underlingk's defeat, but they were presumably arrested for their villainous actions. 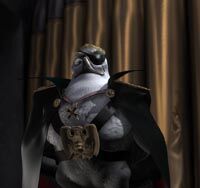 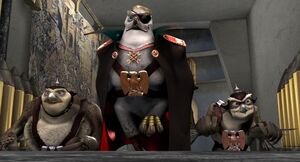 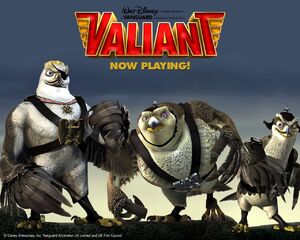