Drinking blood from the living and creating new vampires

Killing and creating more vampires in the names of their master

Mythological Serpent-Like Dragons
The Culebre, better known by its Asturian name, "Cuélebre", are giant winged serpent-dragons of the Asturian and Cantabrian mythology, that live in a caves, forests or marine caverns and guard treasures and/or keep anjanas as prisoners.

When they are first born, they don't have wings, and only grow them as they mature. Similarly, their scales get darker and tougher as they age, becoming impenetrable to various weapons (and they're already tough enough to deflect bullets).

They are mostly depicted as being winged snakes, hence the name 'culebre', relating to colubrids.

Culebres are strong creatures, able to chase after horses and kill them without difficulty. They can spit sulfur and breathe fire out of their powerful jaws, in case there's something they can't normally overpower, and likely have a venomous bite as snakes typically do. One particular culebre threatened to lay waste to an entire town, boasting incredible power that he never got to demonstrate. They likely possess even more power than we know, since some keep anjanas, powerful fairies, as prisoners.

During the night of Saint Bartholomew, their powers increase exponentially, becoming powerful enough to create storms so destructive they can level towns.

In Midsummer (St. John's Eve), which is a magical night in Asturian and Cantabrian folklore, it is possible for brave men to defeat it, whose spells don't take effect that night. They also get weaker the older they get.

A culebre watches over an anjana. 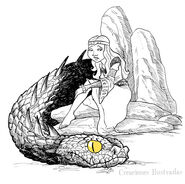 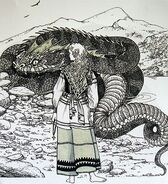