He is a high-ranking member of the Black Order and, physically, the strongest one of them all. He (alongside Ebony Maw, Proxima Midnight, and Corvus Glaive) assists Thanos in his quest to collect the Infinity Stones.

He was portrayed by Terry Notary, who also played Spitz in the 2020 The Call of the Wild adaptation.

Obsidian was first seen raiding the Asgardians' ship following the destruction of Asgard by the deceased Surtur. Along with his father and siblings, he slaughtered the Asgardians to their deaths just as Thanos fights against the raging Hulk. Although Obsidian intends to help Thanos, Maw tells him to stand down, knowing that Thanos is too strong for the Hulk to defeat. When the defeated Hulk is sent back to Earth by Hemidall (who ends up being killed by Thanos), Obsidian helps his siblings in forcing Loki in surrendering the Space Stone (the Tesseract) to Thanos. It is also revealed that Obsidian was involved of his father's attack on the planet Xandar to gain possession of the Power Stone (the Orb), which he used to destroy Xandar. After Thanos kills Loki, Obsidian escaped with his family as Thanos uses the Orb to destroy the Asgardians' ship, leaving a helpless Thor to drift in space.

With two of the Infinity Stones in place, Thanos sends the Black Order to Earth to collect the Time Stone (the Eye of Agamotto) and the Mind Stone while he personally travels to Knowhere to collect the Reality Stone (the Aether) from the Collector and Vormir to collect the Soul Stone from the Red Skull. Assigned to collect the Eye of Agamotto, Maw and Obsidian tracked down its current location in New York City, where they laid down an attack in to draw Iron Man, Spider-Man and Doctor Strange (the current holder of the Eye) into the scene. Despite the heroes' efforts, Maw managed to capture Strange and flies away on his ship, intending to deliver the Eye to Thanos at the planet Titan while Obsidian meets up with Proxima and Glaive after their failed attempt to collect the Mind Stone.

After collecting the Aether, the Soul Stone and the Eye of Agamotto, Thanos sends Proxima, Glaive and Obsidian to Wakanda, ordering them to lead a massive army of Outriders to attack the country and obtain the Mind Stone at all costs. This forces several Avengers and Wakandan warriors to fight back against the massive army. During the battle, Obsidian engaged into a fight against Bruce Banner wearing a Hulkbuster suit. Though he managed to tear off one of Banner's arms, Banner set the arm flying by activating its thrusters, sending Obsidian into the forcefield protecting Wakanda until he exploded to his death. His siblings and the Outriders would later meet the same fate after being killed by the Avengers and Guardians.

Despite the losses, an arriving Thanos didn't care about Obsidian's death and managed to collect the Mind Stone after killing Vision. Thanos then used all of the Infinity Stones to wipe out half of the universe's populace (including several Avengers and Guardians), much to the heroes' distraught.

He can be seen during the final battle, along with the rest of the Black Order. Cull began to fight Iron Man before being stepped on and subsequently killed by Giant Ant-Man. 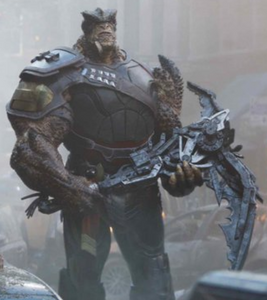 Cull as Thanos destroys the Statesman with the Power Stone.

Cull and the Black Order are teleported out of the Statesman by Thanos.

Cull's death during the battle of Wakanda.

2014 Cull being crushed to death by Ant-Man during the battle of Earth.