He was portrayed by Richard Tyson, who also played Buddy Revell in Three O'Clock High.

Crisp is a drug dealer who has been on the run from police detective John Kimble for five years. He has an ex-wife named Rachel Myatt Crisp, who works at Astoria Elementary School under the name of Joyce Palmieri, and has a son named Dominic who he no longer sees. Crisp also has a devious mother named Eleanor Crisp.

Crisp is constantly searching for Rachel and Dominic, who left him long ago after discovering his true nature as a devious criminal. It is believed that when Rachel left Crisp, she stole millions of dollars from him but this is later revealed to be a lie spread by Crisp to incite the underworld to find her for him. Crisp receives information regarding Rachel's whereabouts from an informant before murdering him. A young female drug addict named Cindy is the only witness to the crime, but she refuses to testify, and so John is sent to find Rachel and persuade her to testify instead in order for Crisp to receive a full prison sentence.

John and his new partner Detective Phoebe O'Hara go to Astoria to search for Rachel, with O'Hara planning to act as a substitute teacher in Astoria Elementary School's kindergarten class. After she falls ill, John is forced to take her place and meets the young pupils in the class, including Dominic. He also meets Rachel since she is also a teacher at the school, and although he is at first unaware of her true identity, they quickly become very fond of each other. Meanwhile, Crisp's mother Eleanor provides Cindy with spiked cocaine that kills her, and the case against Crisp is then dismissed since no other evidence exists. Crisp is then released from prison and then he and Eleanor then go straight to Astoria Elementary School using the information he received from the informant, under the alias Mr. Green, eventually locating Rachel, Dominic, and John in one of the classrooms. Crisp sets the school library on fire and while everyone is fleeing, he abducts Dominic and escapes with him. He is spotted though by John's students and the detective gives chase, while Crisp attempts to convince Dominic that he is his father. As John arrives, Crisp uses his own son as a hostage, but the class' pet ferret that Dominic had rescued during the fire alarm bites his father in the neck. In pain, Crisp shoots John in the knee, but John instantly grabs his gun and fires three shots into Crisp's chest, ending his life forever.

Crisp was scum in every sense of the word. Though he claimed to love Dominic (whom he originally named Cullen Jr. in honor of his ego), he clearly saw the boy as his property. He was cruel, ruthless, sadistic and egomaniacally vain. He showed no remorse for murder and setting a school on fire and placing children in danger. He was also a major factor in John losing his family and why his son wishes not to see him. 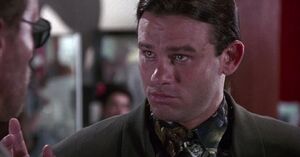 John Kimble attempting to arrest Crisp at a hairdressers. 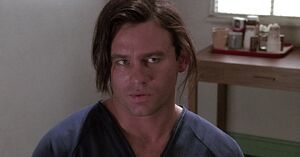 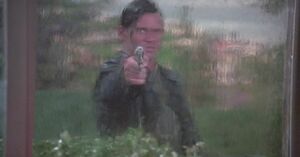 A vision of Crisp appearing in John Kimble's dream. 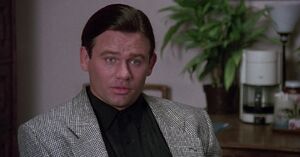 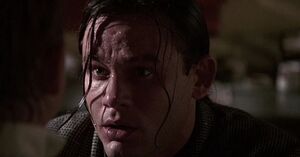 Crisp trying to convince Dominic that he is his father. 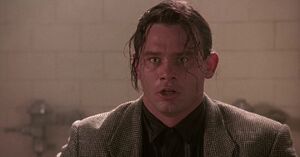 Crisp holding Dominic hostage after being confronted by Kimble. 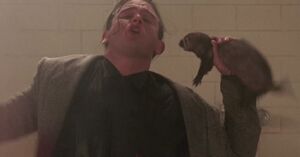 Crisp being shot three times in the chest.