Many men and women

Prepare for the coming of Cathulhu (succeeded)

Aid their god in both destroying and remaking the Earth.
Possess the magic of the Necronomicon (both failed).

The Cult of Cathulhu is a fanatical cult of men and women dedicated to the worship of the supernatural beast known as Cathulhu and they are a villainous faction in The Real Ghostbusters cartoon series.

Based in New York City, the cult is led by Clark Ashton and meet dressed in light purple robes and wear plum octopus masks with the red octopus insignia of Cathulhu on them representing the countenance of their idol.

During a extraordinary celestial alignment they have been waiting for, the Cult made their move and had the Necronomicon they needed to summon Cathulhu into the mortal world and rule at his side.

The Ghostbusters traced them to Wagner's Occult Shop in East Greenwich Village and disrupted their meeting. However, the Cult escaped and regrouped at New York's Coney Island. However, after the cult's successful summoning of Cathulhu, the hideous deity was not gracious towards his disciples, and the Cult fled to avoid getting trampled over.

When the Ghostbusters defeated Cathulhu and drove him back to the other side, the whole cult were about to retaliate when the police arrived and arrested them all. 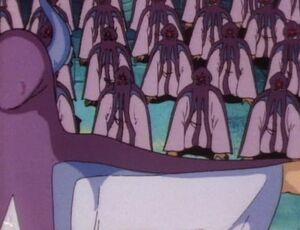 Members of the evil Cult of Cathulhu. 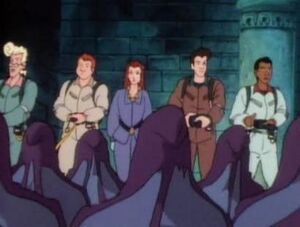 The Ghostbusters along with occult scholar Dr. Alice Derleth, confronted the sinister Cult of Cathulhu. 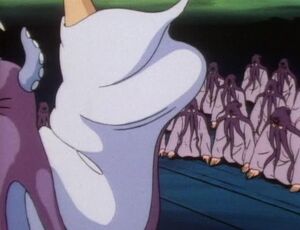 The Cult of Cathulhu began summoning their lord and master, Cathulhu. 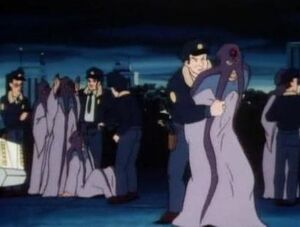 After their plans of destroying the world have failed, the members of the Cult of Cathulhu were later immediately arrested.