Worship Cthulhu intensely so it can gain enough power to tear open dimensional boundaries and arrive on Earth to rule it (as is foretold by Necronomicon).

Merge Earth with the City of R'Lyeh.

The Cult of Cthulhu are an antagonistic faction in South Park, serving as the secondary antagonists of the Coon trilogy. They are a sinister cult of religious fanatics who worships the dark lord Cthulhu.

The Cult of Cthulhu chant the prayer "ph'nglui mglw'nafh Cthulhu R'lyeh wgah'nagl fhtagn" read from the Necronomicon to begin their meetings. The prayer translated means, "In his house at R'lyeh dead Cthulhu waits dreaming". This prayer also referred to Cthulhu's unholy homeland, the Nightmare City of R'Lyeh mentioned in the esoteric tome known as the Necronomicon.

When Coon and Friends were selling lemon bars to help with the damage Cthulhu was causing within the Gulf of Mexico, the cult leader bought the last of their lemon bars, and taunts them by saying, "There is no way for them to stop the almighty Cthulhu".

Mysterion learns of his parents involvement with the cult 10 years ago while investigating the cult with the Coon and Friends on the internet. While spying on the cult they notice another cryptic chant, "That is not dead which can eternal lie, And with strange aeons even death may die".

Thinking the cult has something to do with his supernatural powers of regeneration, he does his own detective work to find out about his origins. Mysterion asks the Goth Kids what this phrase means but is murdered by the cult leader and the Goth Kids in an ambush.

In "Coon vs. Coon & Friends", Kenny is resurrected to Mrs. McCormick, she expressed regret for attending the cult meetings in the past, hinting that Kenny's frequent deaths and resurrections may be related to the cult. 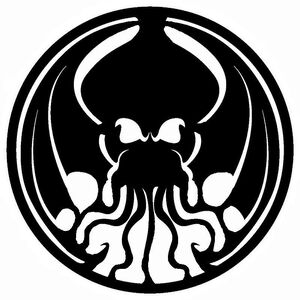