Cause chaos in Gotham City (failed).

The Cult of Jerome is a major antagonistic faction in the television series Gotham. They are an underground movement obsessed with the maniac Jerome Valeska and later, Jeremiah Valeska. These followers began to surface after Jerome was betrayed and murdered by Theo Galavan. They appeared as a very minor villainous faction in Season 2, and return in Season 3 and 4 as supporting antagonists, and in the latter season they are later led by Jerome's brother Jeremiah Valeska. However, they got killed after turning against him.

During Jerome Valeska's attack on Gotham City and leading The Maniax, several people became obsessed with his philosophy and madness. After Jerome was murdered by Theo Galavan during a hostage situation at a charity gala, a few individuals began mimicking him. The first known copycat was a man watching Jerome's performance on television during the children's gala, and he proceeded to cackle at the bar he was sitting at. The second copycat was a young boy in a dysfunctional family, laughing manically at Jerome's broadcast while his parents were arguing. The last two are a pair of men who at night see the news of Jerome's reign of terror on Gotham and his attack on the Gotham City Police Department. The pair begin to laugh maniacally in a similar manner to Jerome. Noticing a passing bum, they follow the man into an alley and knife him to death. Then one of the men proceeds to stab his friend repeatedly to death.

The followers of Jerome began to evolve beyond just four individuals, as a criminal and band member Jeri started running a nightclub entitled to Jerome, and the individuals there began wearing clothing similar to the Maniax (such as their straight jackets). The groups of followers took to wearing clown like makeup. Bruce Wayne stumbled upon it when looking for Jeri to ask on the location of Matches Malone. When Detective James Gordon infiltrates the nightclub to try and stop Bruce from going after Malone, he ends up being lynched by the followers, although manages to put up a fight and brings Jeri into custody.

Graffiti in the form of a smile with "HAHAHAHA" written started appearing in locations across Gotham City. This is most likely the work of Jerome's followers.

The followers of Jerome ended up becoming a network, operating in Gotham City. Morgue worker and former Indian Hill scientist Dwight Pollard appeared to command the followers of Jerome, and they had plans to resurrect Jerome from the dead. The group then raid a Wayne Enterprises warehouse which stores bodies from the Indian Hill facility, with one of them being a preserved Jerome.

When seemingly unable to bring Jerome back from the dead, Dwight cuts off Jerome's face and wears it as a mask, and states that they are all Jerome and that he lives through them.

Jerome ends up returning from the dead after a short delay, and kidnaps Dwight from police custody and takes him to a power station. Jerome reattaches his face, and leaves Dwight tied up and surrounded by explosives, which detonates and wipes out the power in the city, plunging it into chaos.

Jerome takes control of the group and they launch an attack on Wayne Manor, so he can finish off his original goal in murdering Bruce Wayne. Jerome takes Bruce to a sadistic version of a theme park which his followers have helped take control of, and tells Bruce that he has managed to expose "normal" people's darkest desires following him plunging the city into darkness, although Bruce defies Jerome and states that good people do remain in the city.

The GCPD manage to raid the theme park, and after a standoff between Bruce in Jerome the former manages to subdue the latter after a brutal fight, and Jerome is taken into custody and sent to Arkham Asylum.

A group of Jerome's followers led by an unnamed cultist gather together at Jerome's grave, who gives a few words about their idol/leader. A person dressed as a jester confronts the group and the cultist orders her to leave, and when she refuses, he throws a knife at her in effort to murder her, but she catches and catches the group's attention through the final request of their late leader that asks them to dig up his grave and throw him a wake at the GCPD. Right after Captain James Gordon and the GCPD learn of Jerome's "wake", the cult arrives at GCPD Central to take it over, Gordon and Lucius Fox devise a plan to trap the gang (most likely to reduce the body count) and let them celebrate their dead leader's legacy with his supposed casket. Gordon catches the apparent ring-leader of the attack and, with Bullock, interrogates him for information on who really put him up to the brazen attack, but he is uncooperative and is put in a police vehicle. The same ring-leader is captured by Penguin and Butch Gilzean who have plans for him. Later, the cultists are all rounded up and arrested by the police using tear-gas. Meanwhile, another group ambushes and abducts Alfred in Wayne Manor. Penguin and Gilzean torture the ring-leader for information regarding the recent explosion and learn that he and the rest of the gang have been manipulated by Jerome's twin brother, Jeremiah.

After Jeremiah seemingly kills Gordon, he and his own gang form a revamped version of the cult. He then makes his true self known to the GCPD and the city, demanding they evacuate the city in six hours or he triggers all the bombs he wired throughout the city. He then gives a demonstration by exploding the clock tower.

Jeremiah's gang follows Jeremiah to his hideout to be met by Penguin and his associates, who are leveraging his core relay that is held by a severely injured manipulatee, and make their own demands in exchange for it. Though he at first plays along, he overhears Penguin's plans to murder him once he gets the money and orders his gang to kill the hostiles. After Alfred is saved and the bombs are disabled by the heroes, Jeremiah (who is unaware of his failures) tells his henchmen about his lonely childhood and how it feels good to have his own people by his side and he starts a dawning of Gotham, when his gang members discover a news report by Gordon, alive and well. He is disappointed when Gordon calls him a "pale imitation of Jerome", and calms his followers down, but they turn on him when his bombs turn out to be deactivated too, and runs for his life and locks his own gang in the room and burns them all alive with a button. That said, it could be possible that the Cult would have turned on him any way given how loyal they are to Jerome.

In Season 5, Jeremiah established his own followers known as the Church of Jeremiah. This cult is similar with the only difference being that they are both more ruthless and a greater threat. They end up being the second main villainous group of the season. 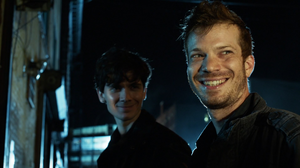 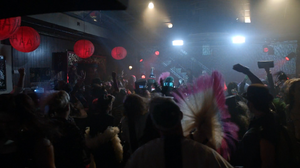 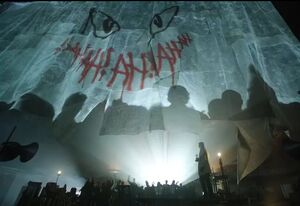 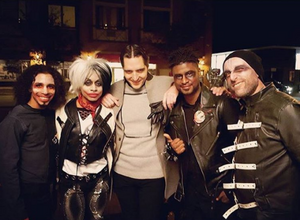 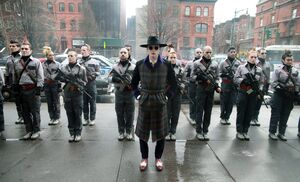