Aid their master in his quest to destroy and remake the universe in his name.

The Cult of Kefka (in Japanese: 狂信者, Kyoushinsha) is a fanatical cult and an antagonistic faction in the video game Final Fantasy VI. They are a secret society consisting of men and women who faithfully, but at the same time fearfully, worship the mad clown-turned-God of Magic named Kefka Palazzo.

The Cult of Kefka was formed by Kefka after his rise to power within the World of Ruin, and are said to have sold their hearts and souls to him. The cult is based out of a tower in the center of the risen Serpent Trench, which houses numerous of Kefka's treasures, including the coveted Soul of Thamasa. A band of thieves at the foot of the tower remark that only Magic can be used while climbing, making it difficult to explore, and that the Cult members at the foot of the tower simply shuffle about praying to Kefka, unresponsive to anyone. However, it is a common rumor that if a loved one calls out to a member of the cult, they will be restored.

The heroes who are the Returners, an organization that opposed against Emperor Gestahl and the Gestahlian Empire, found Strago at the tower as a cult member, but he does not respond like the rest. If the party returns with Relm, she calls out to him and he comes to his senses and rejoins the party, breaking the cult's hold over him.

After the party climbs the tower to take the Soul of Thamasa, an ancient crystal orb named after the Magi town of Thamasa, the Cult members rush up to the top of the tower, and demand that they return Kefka's treasure, before the cult's leader and fellow disciple of Kefka, the Magic Master, arrives to deal with the Returners. After the Magic Master's defeat, the cult members have vanished. A small group of them will still be found pacing at the foot of the tower, however.

The Cultists' Tower, home and lair of the Cult of Kefka. 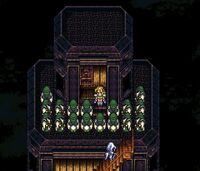 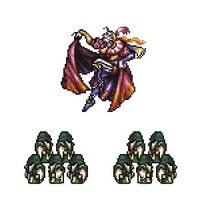 Members of the Cult of Kefka as seen in the iOS/Android version of Final Fantasy VI. 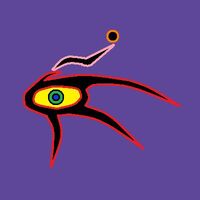 Retrieved from "https://villains.fandom.com/wiki/Cult_of_Kefka?oldid=3615057"
Community content is available under CC-BY-SA unless otherwise noted.