To indoctrinate the Yellow Puppet (or Manny) into their ranks and worship Malcolm forever.

The Cult of Malcolm, otherwise known as the "Love Cultists" or the "Love Cult", is a religious cult led by Shrignold the Butterfly, and they are a major antagonistic group in Don't Hug Me I'm Scared 3 of the Don't Hug Me I'm Scared series of short viral videos produced by Becky Sloan and Joseph Pelling. In the video, the Cult tried to forcefully indoctrinate the Yellow Puppet into their ranks.

Malcolm is believed to represent Jesus Christ, because Jesus is also known as the "King of Love." His followers could also be seen as metaphors for Christian fundamentalism.

Malcolm is the god of Shrignold and his cult, and he only appeared in the third Don't Hug Me I'm Scared video. Malcolm was a huge head made out of stone that was referred to as the "King of Love" by his followers. Apparently, he was a sentient being who was quick to anger and required feeding. His followers constantly fed him gravel as a means of subduing his anger. He then ceased to exist when the Yellow Puppet woke up. He was then shown being set on fire by an unknown man. 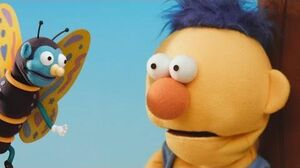 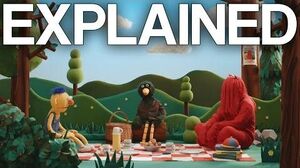 Retrieved from "https://villains.fandom.com/wiki/Cult_of_Malcolm?oldid=3459011"
Community content is available under CC-BY-SA unless otherwise noted.