Fulfill Nostradamus' prophecies by bringing an end to the world.

The Cult of Nostradamus is an evil doomsday cult and the main antagonistic faction of the 1988 Ninja Gaiden arcade game (which is known as Ninja Ryūkenden in Japan and Shadow Warriors in Europe). The cult was led by Bladedamus, supposed descendant of famous French seer Nostradamus with the goal of bringing about the end of the world.

In 1999, America, the Cult of Nostradamus lead by Nostradamus's descendant Bladedamus was rising from obscurity as Nostradamus's doomsday prediction drew closer. With country gripped in fear and wishing to fulfill the prophecy of his ancestor, Bladedamus orchestrated massive jailbreaks from Alcatraz and world's largest maximum security prison elsewhere. The charismatic Bladedamus recruited the thugs, psychopaths and fanatics into his cult, then took control of every major American city, flooding the streets with legions of criminals. Bladedamus took control of the ICBM control switch.

US government, aware of Bladedamus' ICBM possession, attempted to assassinate Bladedamus through stealth covert-ops. But all its attempts failed and resulted many losses of its agents, leaving the US President powerless against the cult. Until...

In Japan, two ninjas, whose clan had shaped history in troubled times from behind the scenes since the Sengoku period, learn of this, readies themselves, and headed to America to stop Bladedamus and his cult.

Upon arriving in San Francisco, the two ninjas were attacked by Bladedamus's minions. Mainly using hand to hand combat, the ninjas fought off zillions of criminals consisting of masked psychopaths, street gangs, clawed killers, road warriors, ninja and sumo wrestlers, as they made their way through New Jersey, Las Vegas, the Grand Canyon, the American wilderness and, finaly, the Cult of Nostradamus's headquarters. Inside the headquarters surrounded by demonic symbols and artifacts, the ninjas dispatched the last of the cult to face Bladedamus in a climatic battle, defeating Bladedamus and any hope of his Nostradamus prophecy ever being fulfilled. With their mission accomplished, the Ninjas returned to Japan. 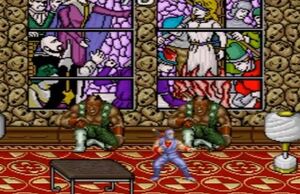 The Cult of Nostradamus.
Add a photo to this gallery

Retrieved from "https://villains.fandom.com/wiki/Cult_of_Nostradamus?oldid=3602979"
Community content is available under CC-BY-SA unless otherwise noted.