The Cult of Rakdos is a demonic cult and secondary villain organization of Magic: the Gathering. Founded by the guild's Parun, the archdemon Rakdos, the guild is responsible for menial labor and the service industry in Ravnica, while also specializing in assassinations.The Rakdos are known for having the best (and most dangerous) parties on Ravnica.

Before the Guildpact was established, the demon Rakdos terrorized Ravnica with little repercussions. In order to keep the guild in check(and to play into Szadek's plan) the Cult of Rakdos was signed into the Guildpact. For most of this block, the group didn't cause any noticeable problems. But, once Szadek broke the Guildpact, the Rakdos were free to do what they desired. During this time, Rakdos was asleep and the acting guild leader Izolda was in charge of the guild. She had a plan to sacrifice the son the the Golgari guild leader Jarad and use his blood to summon Rakdos. Hearing that his son was kidnapped, Jarad went to Rix Maadi to save him. He was successful in his endeavor, but he was killed in the process. Using Jarad's blood, Rakdos was awoken and set his sights on tormenting Ravnica(By Izolda's orders). Through the use of draconic cerebral fluid provided by the Simic guild leader Momir Vig, she was able to control Rakdos as he began to cause chaos. Momir Vig knew this would happen and created Experiment Kraj to deal with Rakdos and conquer Ravnica for himself and the Simic Combine. The two clashed and both did a good amount of damage to each other. Once the battle concluded, Rakdos managed to destroy Experiment Kraj, but not without sustaining serious injuries of his own. Because of Izolda's spell, she suffered the backlash of the spell, causing her a lot of pain. Sensing her weakness, he fellow cultists turned on her and devoured her. With Rakdos' conscience in all the cultists, Rakdos went into a coma and his body was thrown into Rix Maadi, where many thought he was dead.

During the Return to Ravnica block, Rakdos awoke from his coma and became the guild leader again. With the groups leader reinstated and thanks to the machinations of the new Dimir guild leader Lazav, the Cult of Rakdos found itself at war with the Selesnyan Conclave. The war was settled and the Izzet League announced the Implicit Maze, a maze that ran through all of Ravnica that each guild could send a person to race it. The guild that one this race would rule the entire plane. The Rakdos sent the blood witch Exava to run the maze. She did well, but lost to Jace Beleren, a planeswalker who also ran the maze and merged the perspectives between all the guilds, giving him the title of the Living Guildpact.

In the comic series about Dack Fayden, the Planeswalker named Sifa Grent stole a dagger from the vampire Planeswalker Sorin Markov and used it to gain the cult's loyalty. The Group was ordered to kill Dack should he interfere with his plans. After searching for Grent on the Alaran shard of Grixis, Dack Fayden returned to Ravnica and the Rakdos were ready to slay him. It was brought to Dack's attention that Sifa Grent and the Rakdos were planning to steal the life energy from the Selesnyan Capital Vhitu-Ghazi. Dack Fayden formed alliences between the criminals of Ravnica and the two factions fought each other. After Sifa Grent was murdered, the two groups stopped their fighting.

War of the Spark

The Cult of Rakdos was transformed from a typical cult to a group of performers and acrobats. Thanks to Dovin Baan fixing loopholes in Ravnica's laws, the Rakdos have less ways to legally kill Ravnicans and are only allowed to kill a few citizens at a time or themselves. This has put the cult at odds with the Azorius. During this story line, the cult felt the influence of Nicol Bolas among the other guilds. The cult decided to fight against Bolas instead of serve him.

This changed during the Guild Summit. Rakdos sent an emissary named Hekara to attend the Summit which was meant to unite the Guilds against Nicol Bolas. But when Bolas's minion Tezzeret attached a collar around Lavinia's neck and Bolas used her to kill Hekara, Rakdos and his Cult were removed from the conflict. Later in the story, Ral, Kaya, Teyo, Rat, and Vraska entered Rix Maadi with the hopes of convincing the Cult to join the fight. Rakdos being distraught over Hekara's death still declined. But when Tomik arrived with her body and used a reanimation process, Hekara was resurrected as a Blood Witch and she offered to represent the Guild in Rakdos's stead. With her help, the Guilds managed to resurrect Niv-Mizzet as the new Guildpact. In the the final climax, Gideon Jura's pegasus was shot by Oketra and he fell through the air. Rakdos saved him and brought him high enough to slay Bolas (even though Gideon's attack was ineffective). After the War, Rakdos planned a celebration for their victory by creating a planarwide carnival. 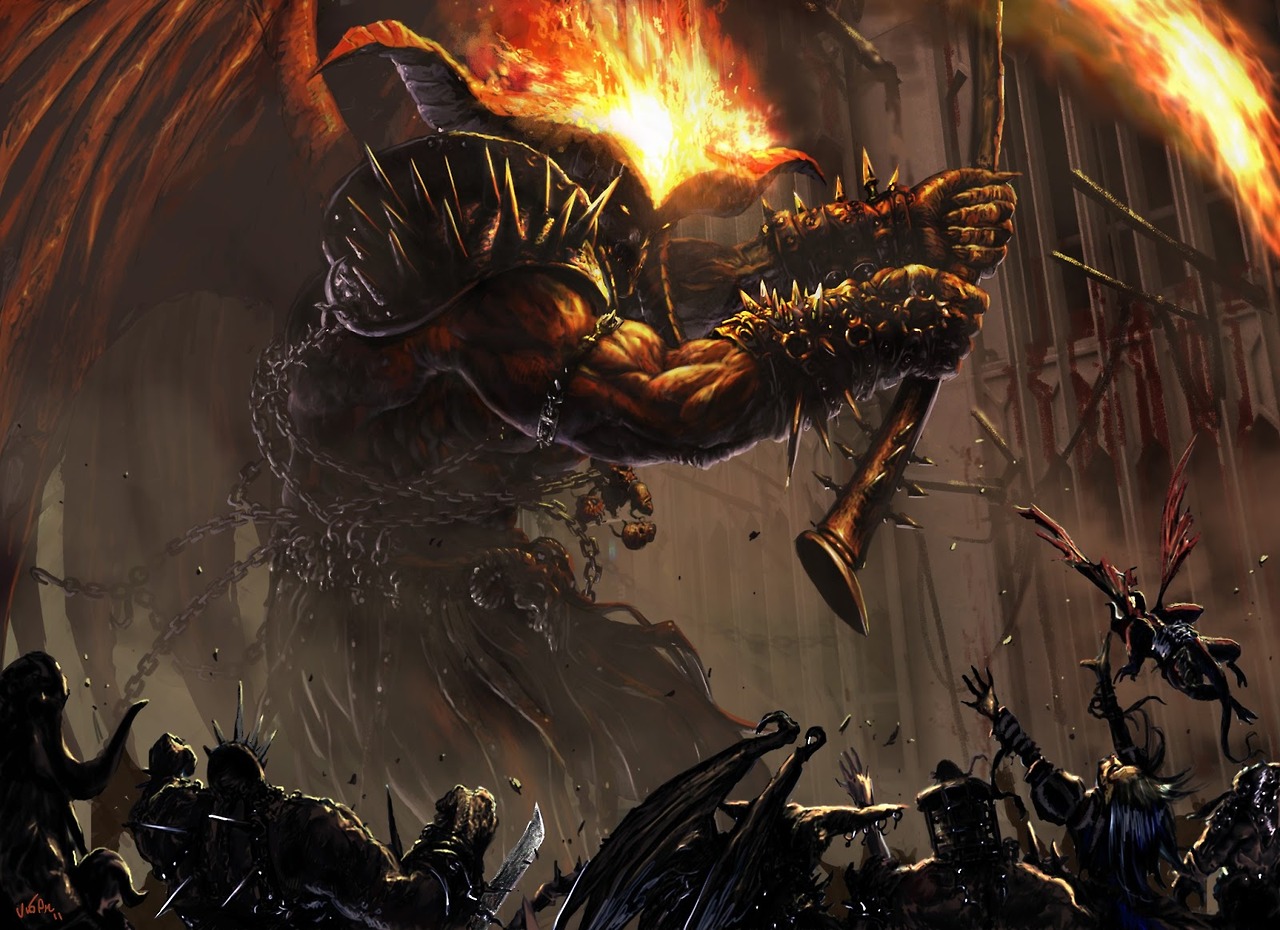 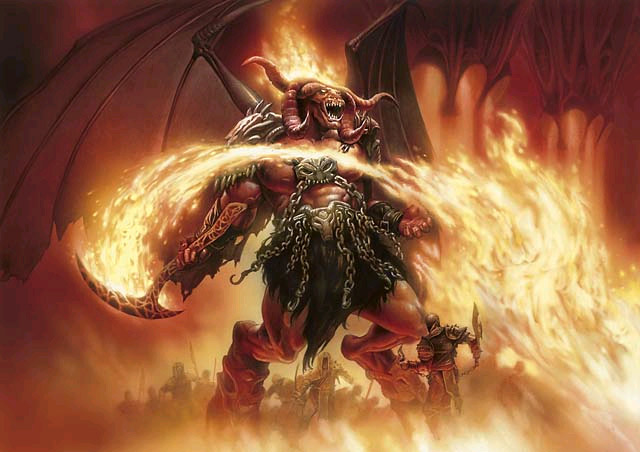 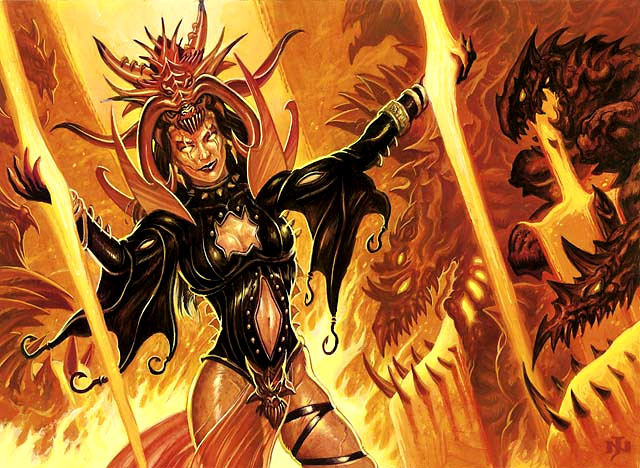 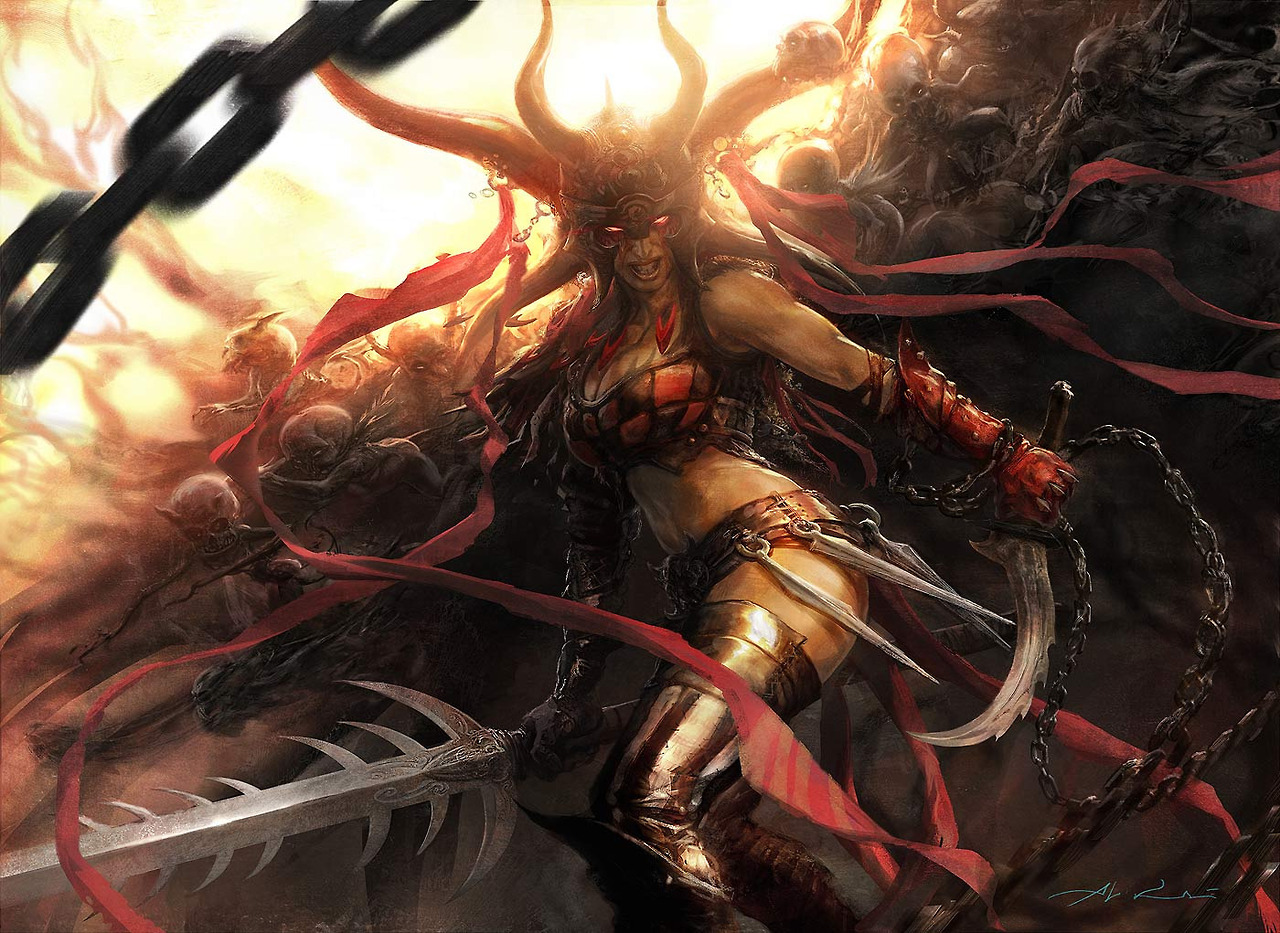 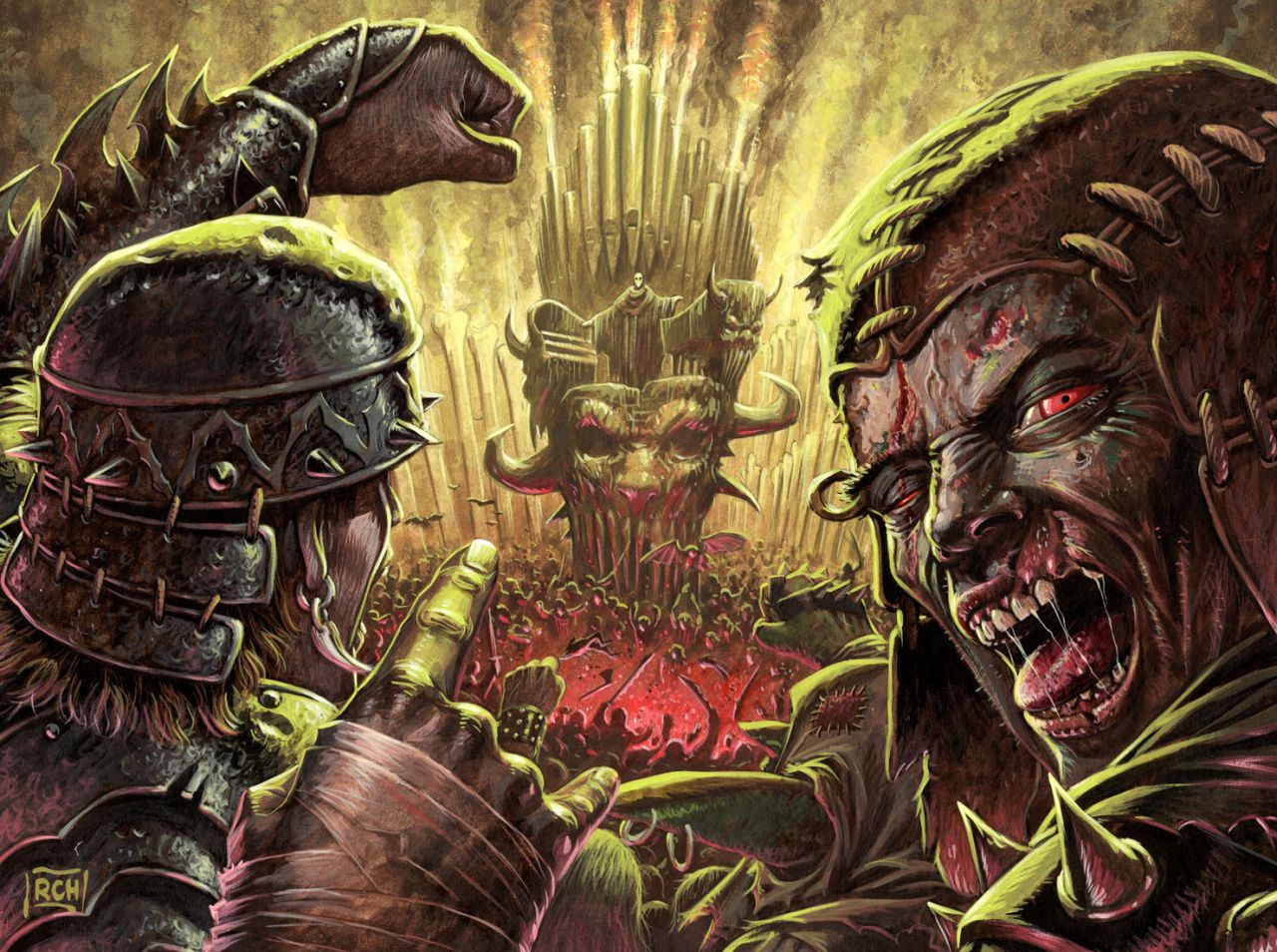 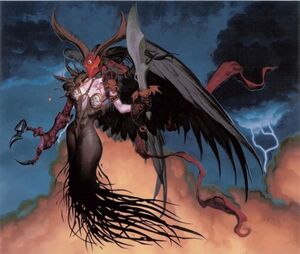 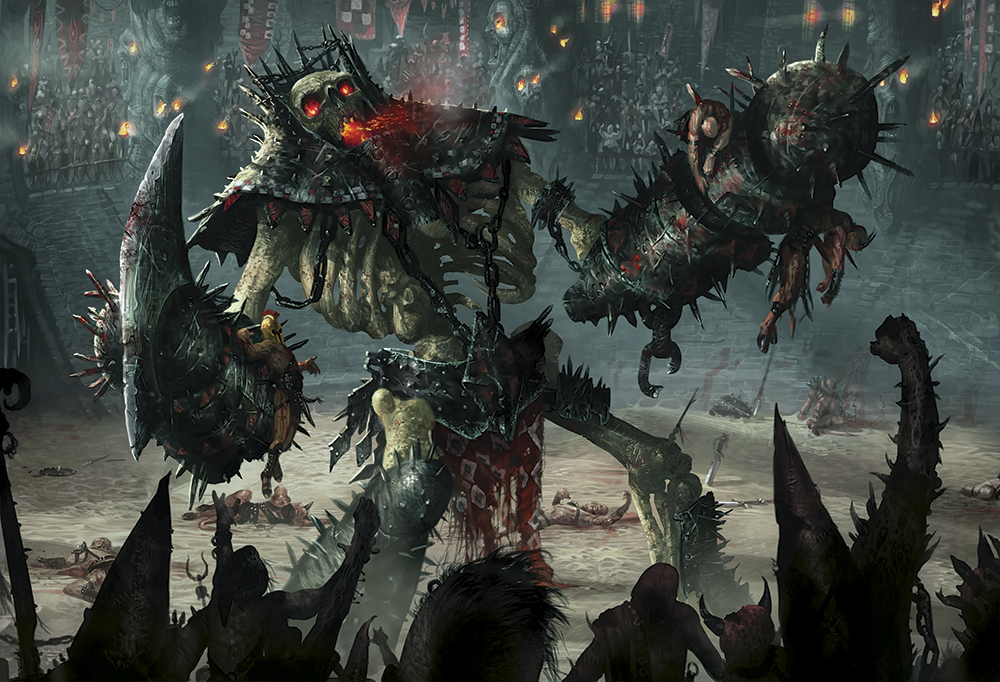 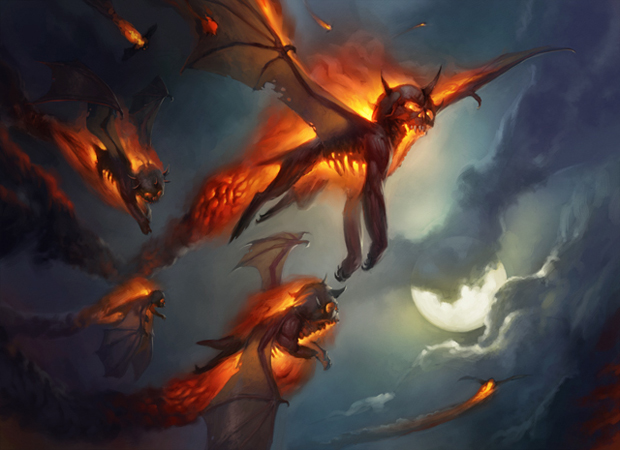 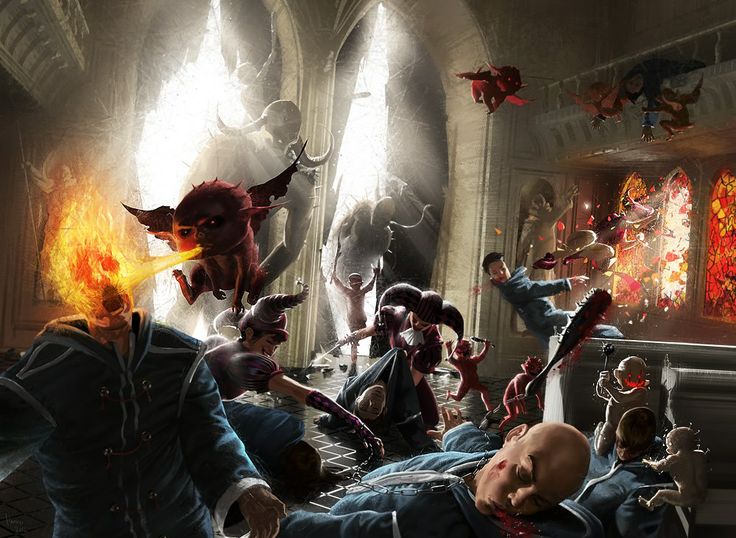 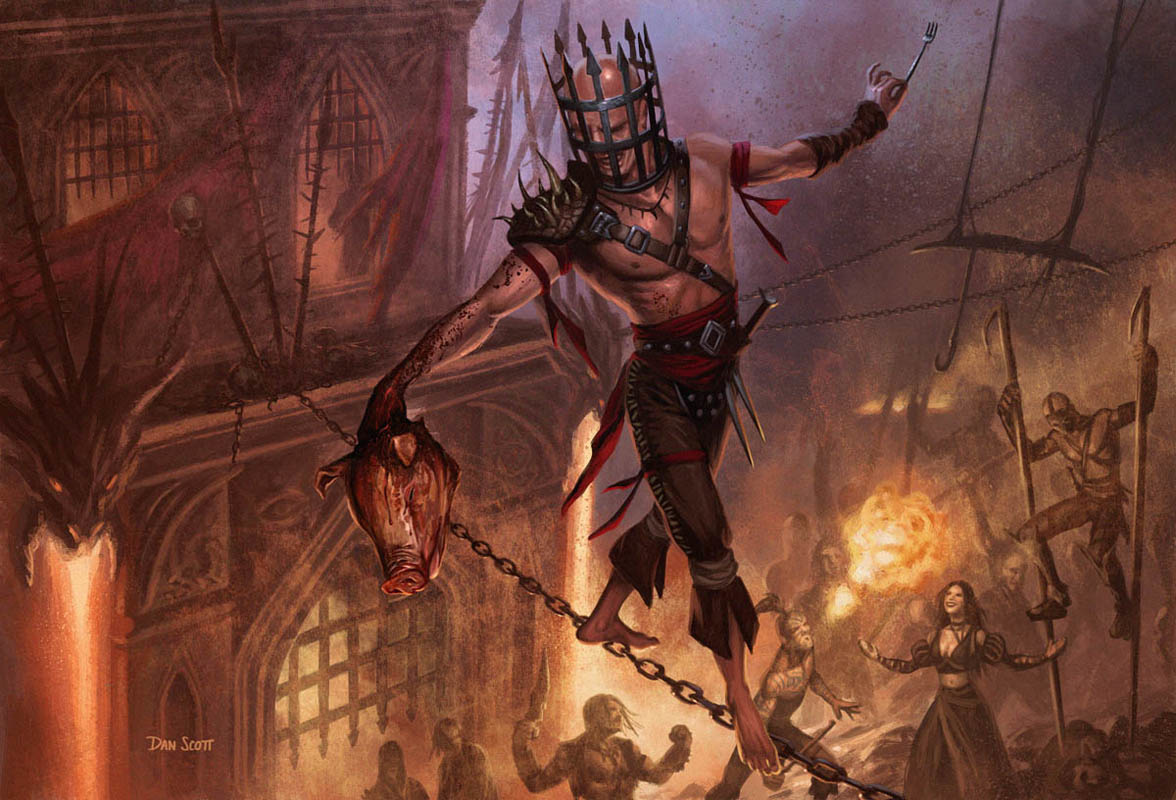 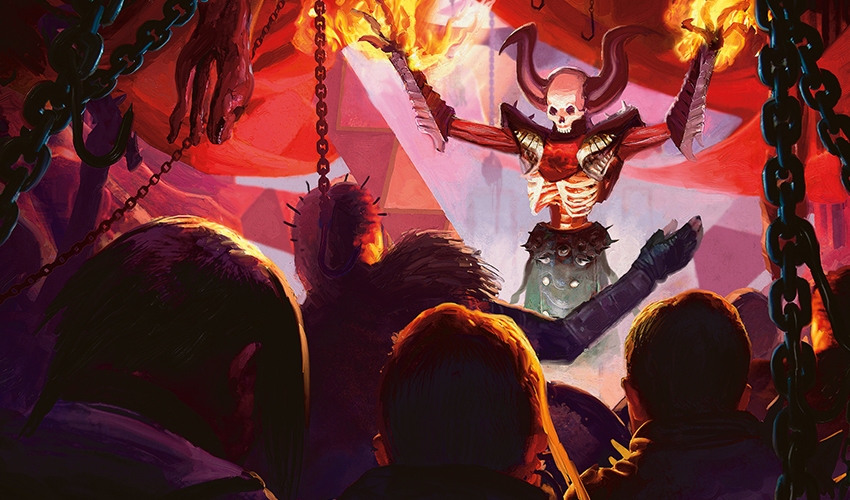 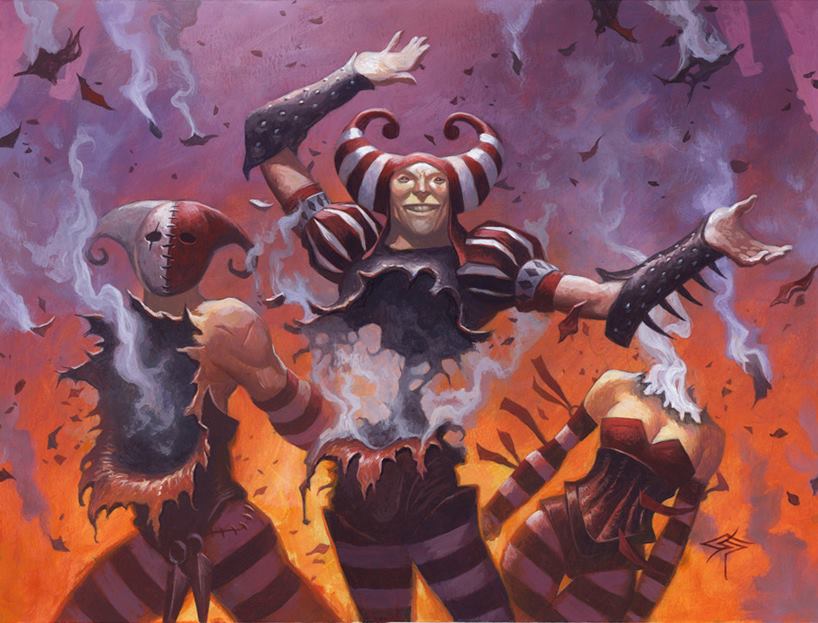 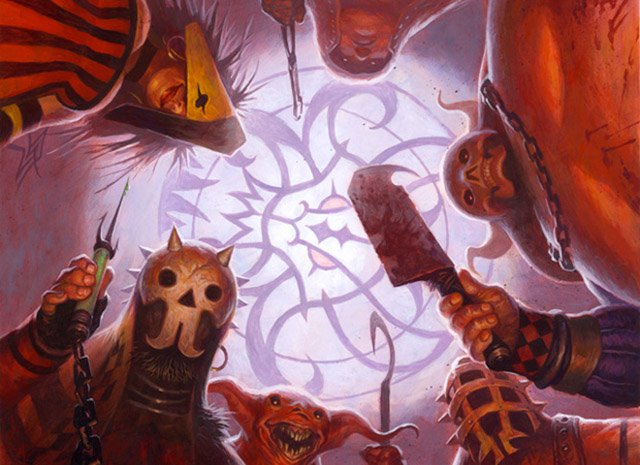 Add a photo to this gallery
Retrieved from "https://villains.fandom.com/wiki/Cult_of_Rakdos?oldid=3971749"
Community content is available under CC-BY-SA unless otherwise noted.