Aid Linley and his companions to destroy Radiant Church so they can be freed from its grasp.

Usage of forbidden magics
Aiding and abetting a tyrannical regime

The Cult of Shadows is one of the villainous factions in The Coiling Dragon series, presented as one of the supporting antagonist and the major rival of the Radiant Church. They are dark magic users with fallen angels and demons as their aid, and many of the cultists are skilled assassins that they can kill anyone in minutes. However, as the series progressed, it was revealed that the Radiant Church is the real worst one of the two.

The Cult of Shadows first appeared when they tried to harm Linley because his alliance with the Radiant Church, but one of its members, Kyle, had befriended Linley once they met and later travelled to the Graveyard of Gods with him, but Kyle quit in the middle and did not fully complete the ten-year-long journey.

The Cult of Shadows later was forced by the Radiant Church to join them in the war against Baruch Kingdom in order to plunder Magic Crystals, even though there are no major grudge between them and Linley.

During the war, in order to avoid her conflict with her old friend, Kyle chose to fight Zassler while other culitists fight Linley's servants, but only a few of them fight Linley including a Fallen Angel who was later slayed. After Pope Heidens used his full power in his Oracular magic, all of the friends of Linley went to support the final battle against Heidens, leaving the Cult of Shadows appalled by Heidens' sheer cruelty.

After the final battle was over and Heidens was destroyed, Linley spared the Cult of Shadows and let them go free, since there are no grudges between them and the war caused great loss on both of them. The Cult of Shadows retreated in peace. 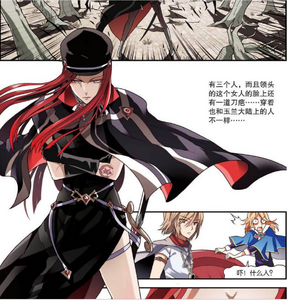 Kyle and her minions from the Cult of Shadows greeted Linley
Add a photo to this gallery
Retrieved from "https://villains.fandom.com/wiki/Cult_of_Shadows?oldid=3526339"
Community content is available under CC-BY-SA unless otherwise noted.