Cult of the Outsider

Cult of the Outsider

The Envisioned
Guardians of the Ritual Hold

Equipped with swords and pistols

Creating a god for the Void

Using the twin-bladed knife on an orphan they kidnapped from the street of an ancient city, the Eyeless created the Outsider. From then on, they made it their primary objective to keep the Outsider, their new god, trapped in the Void while also preventing anyone from reaching it. Due to their prolonged exposure to the Void, the members of the Cult started to change. While at first, parts of their body turned to stone, they eventually became supernatural beings known as the Envisioned. While most of the cultists lived in their community in an abandoned mining complex on Shindaerey Peak, the cult remained a power in Karnaca through their disciples - the Eyeless gang.

Even 4,000 years before of the events of the game, the cult existed. Its members, searching for power, wealth or immortality, started to study and analyze the Void. Eventually, they came up with the plan to add a god-like entity to the Void. Analyzing the stars, they came to the conclusion that the night's sky foretold the necessity of the Outsider and urged the Envisioned, as they were known back then, to act. The Envisioned searched the streets of their city until they found a street urchin that showed promise. They dragged the boy into the void, bound him to an altar and slit his throat with a twin-bladed knife. Using the knife, they cut away the boy's name and turned him into the being that would come to be known as the Outsider.

The Envisioned celebrated their creation, believing that they set alight the fires of divinity at the very heart of the Void. By giving the Void a face and a voice instead of darkness, silence and emptiness, the Envisioned allowed people to experience the presence of the Outsider. Although the Outsider would only speak to a select few, this was preferable to the howling of forever - of nothing without end.

After creating the Outsider, the Envisioned started to patrol the entrance to the Void to prevent anyone from entering the Ritual Hold. Inside the Ritual Hold, the place in the Void where they created the Outsider, the physical body of the young boy was captured in stone and was thus vulnerable to outer influences. While the Outsider as others knew him was not a spiritual body but just an embodiment, the boy in the Ritual Hold was the true Outsider in the flesh. Thus, the Envisioned made it their mission to keep that body - which was sleeping inside its stone shell inside the Void forever and to prevent anybody from reaching it.

Over the millenia, the Envisioned kept guarding the entrance to the Void. Due to the prolonged exposure to the Void and the Eye of the Dead God - the eye of the Void's god that came before the Outsider - which allowed the Envisioned to see beyond the normal reality of things, the physical form of the Envisioned started to change. The contact with the Eye of the Dead God caused their eyes to glow as their vision expanded, and the Void started to turn parts of their body into stone. Eventually, all parts of the Envisioned would become stone and the Envisioned would leave their physical existence behind partly merge with the Void. This turned the Envisioned into powerful beings made of stone and Void and allowed them to shift between realities and to teleport. It also made them far stronger than normal and prolonged their life greatly. Becoming an Envisioned was the highest honor a member of the Cult could receive and new recruits to the cult would longingly wait for the honor to become one with the Void themselves.

Building a community inside the quarry at Shindaery Peak, the cultists also started to study the Void, it's powers and the causes of it's exposure. They also analyzed and studied the Envisioned, which no longer communicated with the cultists but remained in their half-existence and kept guarding the entrance to the Ritual Hold. They also studied the long-time effects and short-time effects of the sanguine infusion.

While the cultists remained in their headquarter on the mountain, they had contacts in Karnaca, nonetheless. A gang interested in black magic and in supernatural - the Eyeless gang - served as pawns for the goals of the cultists. While some of the Eyeless were only interested in gang-related goals, most of the members, which came from every social class. were interested in the Void and hoped to gain power, wealth, inspiration or other boons by attempting to contact it or the Outsider. They tried to be exposed to the Void by perfoming a mulitude of rituals or sacrifices. For example, the Eyeless performed "sanguine infusions" at their headquarter Spector Club, which was a transfusion of the blood of dying people until all their blood was drained. The cultists kept watch over the Eyeless and if one of them showed promise and faith, they were "promoted" and allowed to join the commute of the cultists up on Shindaerey Peak.

When new recruits joined the cultists at the quarry, they had to leave every attachment to their former life behind - no matter whether they were beggars or aristocrats. Personal belongings were destroyed and contact to the outer world was forbidden. One time, an aristocrat brought his hound with him. The cultists had him kill the dog and then murdered him, as they found his weeping appaling. The Eyeless also sent food, scrolls, scientific books and other stuff up to the cultists. At tone time, one of the smugglers hid a letter to a loved one inside one of the crates. The cultists discovered the letter and burned it. They then informed the Eyeless' leadership about the letter and implored them to seek for the smuggler and eliminate them. The cultists, in turn, looked out to find the loved one among their ranks.

Eventually, the cultists once more came in possession of the Twin-bladed knife. They sent this knife to the leader of the Eyeless, Dolores Michaels, for safekeeping. Dolores locked the blade up in the high-tech vault of her bank. In addition to the vault, the lockbox containing the blade was secured by three locks. The keys for the locks were given to the three leaders of the Eyeless: Shan Yun, Ivan Jacobi and Dolores Michaels herself.

However, Billie Lurk and her mentor Daud, on their mission to kill the Outsider, managed to steal the keys from the leaders. Billie infiltrated the Dolores Michaels' bank and obtained the twin-bladed knife from within. After stealing the knife, Billie used the information from Michaels' letters to locate the hideout of the cultists and headed there in order to enter the Void and kill the Outsider.

Billie heads to the abandoned mining complex and soon realizes that she has stumbled upon the headquarter of the cult. Before even entering the quarry, she sees two cultists cornering a third one. The third one breaks down in horror and cries, claiming that the does not want to merge with the Void, as he has seen what it does to people. Although they try to calm him down, the others eventually shoot him in the face as they realize that he is lost to them.

On her way deeper into the quarry, Billie finds the vast library of the cultists, where they have stored all their research and scientific findings. A group of cultists are discussing the so-called "hollows", places where the Void leaks into the real world, which have been appearing since the witch Delilah returned from the Void. After advancing through the library, Billie finds the Eye of the Dead God. By touching it, Billie gains advanced vision and finds the place inside the quarry where the Void can be entered. Although she is hunted by the Envisoned, whom she can see since she has touched the Eye. she manages to flee into the Ritual Hold - as the first being to enter the Hold since the ritual. By removing the Outsider from the Void - either lethally or non-lethally, she destroys the entire purpose of the Cult of the Outsider and leaves them reduced to nothing.

Cultists in the quarry

Cultists in their library 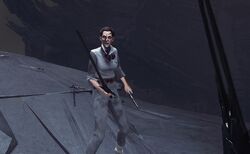