Cult of the V8

Kill Max and Furiosa.
Carry out the orders and will of Immortan Joe.

The Cult of the V8 is a society based at the Citadel and the main antagonists of the movie Mad Max: Fury Road. They are a cult that worships V8 engines, believing them to hold power and using them to run their automobiles.

It is ruled by the tyrannical Immortan Joe, who is worshipped as a god among his people.

The main members of the cult are the War Boys, who are led to believe that they will ascend to Nordic afterlife Valhalla when they die. They are prone to suicide attacks and spray chrome paint in their mouths as a purification method before sacrificing themselves.

The cult was formed by Colonel Joe Moore, after he and his followers invaded the Citadel and set up shop in it, with Joe branding himself "Immortan".

When Furiosa freed Immortan Joe's wives and helped them escape, Immortan Joe gathered up his followers to go reclaim them. However, Joe and his followers were defeated, with Furiosa becoming the new ruler of the Citadel. 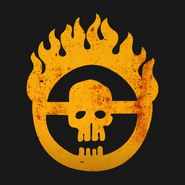 Retrieved from "https://villains.fandom.com/wiki/Cult_of_the_V8?oldid=3734504"
Community content is available under CC-BY-SA unless otherwise noted.