Curaré is a deadly assassin and a villainess in DC comics. She is a member of a deadly guild of ninja assassins known as the League of Assassins and is one of their best members. She was sent on a mission to kill Sam Young. She appeared in the episodes A Touch of Curaré and Final Cut of Batman Beyond.

Nobody knows Curaré's true identity nor has seen her face (apart from Batman II). But everybody knows she's deadly, and possessed an unending knowledge of killer tactics. She was an excellent martial artist, and was designed to kill. She possessed a scimitar that has an edge no thicker than a molecule. It could cut through anything and she often used it to deflect gunfire.

In the Society of Assassins, the price of failure was death, and Curaré was the first to run afoul of that rule when she finally met her match in the form of Batman II and Commissioner Barbara Gordon. Both of them, working together, managed to capture Curaré and saved district attorney Sam Young from her lethal blade. Curaré managed to escape, but then had to face the fatal consequences of her failure.

She, however, managed to turn the tables on the Society of Assassins, hunting every one of them down, erasing their minds, before they had a chance to kill her. She eventually destroyed the entire Society one at a time and can thus be inferred to be the best assassin left in the world. She was soon captured by Batman. 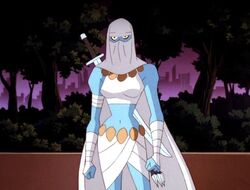 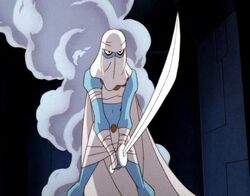