The Man from Snowy River

Curly is the main antagonist of the 1982 Australian live action film The Man from Snowy River, which is based on the 1890 poem by the late Banjo Patterson. He is an English farmhand who works for Harrison and is Jim Craig's rival. He is the boss of Moss.

He was portrayed by Chris Haywood.

Curly is the incompetent stationhand who works for Harrison and despises Jim. He first meets Jim when he starts working at a barn. He tells him that he's planning to be a supervisor as he drops his cigarette, lighting the hay on fire, but Jim puts it out. He then watches over as Jim teaches Jessica how to tie a horse by using the tomfools' knot.

The following night, Curly plays cards with Moss and Frew as Jim comes in. As they talk about the legendary horseman Clancy, Jim tells them that his father worked with Clancy, but Curly insults him.

While Clancy and Harrison are having a conversation together, Curly comes over and lies to Jim about his horse saddle that it came from a circus. Curly is also delighted to know that Jim won't be allowed to go up the mountain to work with Spur. Curly then taunts Jim and leaves with the other cattlemen to go up the mountain.

Later, when Jessica goes missing, Harrison and his riders go out to find her. Kane wakes up the other workers at the station, but Curly is too drunk and passed out to help them.

Later, when a drunken Curly returns to the bunkhouse with Moss, he taunts Jim about Jessica and they engage in a fight. Moss attacks Jim and Curly tries to stab him with a broken bottle, but Frew stops him. He tries to do things on hand, but Jim kicks him in the groin, allowing him to defeat Moss and push him out the window. Curly tries to fight back, but Jim easily defeats him and knocks him unconscious. He later sets Harrison's expensive colt loose, hoping that Harrison would blame Jim for it and get rid of him.

Harrison hires Clancy and the other riders to get the colt back and reluctantly takes in Jim as well. During the chase, Curly spots Jim going down a different path and chases him. He tries to steal the whip from Jim and takes the bridle off his horse's head before falling off his horse in a river. Jim and the other riders cross the river, while Curly is left behind. This is the last time Curly is shown in the film, so it can be assumed that Curly had lost his job for Harrison.

Curly is an extremely greedy, selfish, arrogant, stupid, immature, incompetent and mean-spirited man who hates Jim Craig. He jeers at Jim, cheats at cards, smokes in the stables, and eventually sets free the colt that was worth a thousand pounds, so that Harrison will blame Jim for it after a fight in the bunkhouse when Curly taunted Jim about Jessica. Curly sees Jim as an inferior horseman even after displaying superior skills, and is prevented from helping to drive cattle through the mountains despite being from the mountains himself. He is described by Jim as having the mind of a gutter rat. Despite his incompetence, he is admired by Harrison to be a good worker with horses, as Jessica reveals that he does the horse breaking. 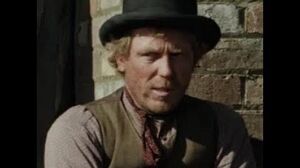