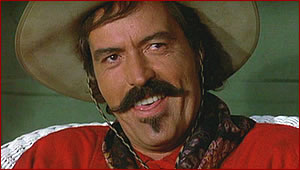 William Brocius, better known as Curly Bill Brocius, the secondary antagonist in the movie "Tombstone", and the leader of the outlaw gang.

He is portrayed by Powers Boothe, who also portrays Joshua Foss and Ethan Roark.

As Wyatt Earp began helping the town rid of the cowboys, shooting aimlessly after a visit to an opium house, Curly Bill is ordered by Marshal White to relinquish his firearms. Curly Bill shoots the marshal and is forcibly taken into custody by Wyatt. The arrest infuriates Ike Clanton and the other Cowboys, who threaten Wyatt, his brothers, and Doc. Curly Bill stands trial, but is found not guilty due to lack of witnesses.

Wyatt and his posse are ambushed by the Cowboys in a riverside forest. Wyatt wades out into the river and engages in a gunfight which ends with Wyatt killing Brocius. Johnny Ringo then becomes the head of the Cowboys.

William Brocius (c. 1845 – March 24, 1882) had a number of conflicts with the lawmen of the Earp family, and he was named as one of the individuals who participated in Morgan Earp's assassination. Deputy U.S. Marshal Wyatt Earp and a group of deputies including his brother Warren Earp pursued those they believed responsible for Morgan's death. The Earp posse unexpectedly encountered Curly Bill and other Cowboys on March 24, 1882, at Iron Springs(present day Mescal Springs). Wyatt killed Curly Bill during the shoot out. In his journal written in October 1881, George Parsons referred to Brocius as "Arizona's most famous outlaw".

Retrieved from "https://villains.fandom.com/wiki/Curly_Bill_Brocius?oldid=1581212"
Community content is available under CC-BY-SA unless otherwise noted.