The Curse of the Fountain Phoenix Gem

Destroying thieves who try to steal the Phoenix Gem.

Protect the Phoenix Gem at all costs.

The Curse, also known as the Curse Dragon, is the final antagonist of Pixar's 22nd full-length animated film Onward.

It was a powerful and dangerous curse in the form of a dragon made out of debris from anything that it finds and guards the Phoenix Gem against anyone who tries to steal it.

Its vocal sound effects were provided by Frank Welker.

According to Corey's prophecy, legends explain that adventurers are seeking Phoenix Gems, while the one who can obtain it, can summon a wrathful curse that will take the form of a dragon out of debris from anything it finds and reclaim the gem from the thief back to its rightful place. The only way to slay the creature is to find and use a Curse Crusher and stab it in its own core.

When Barley finds the gem at the fountain in the climax of the film, he accidently unleashes the Curse that comes with the gem, which then took the form of a wrathful dragon made out of Ian's school while the beast has the dragon mascot's face with artificial eyebrows lowering down to make the dragon look angry and terrifying. This leads to a battle that results in the dragon attempting to reclaim the gem from the brothers, who need it to bring back their father. Corey and Laurel intervene and try to attack the dragon while the brothers tried to restore their father using the gem. With time almost running out, Ian distracts the dragon as Barley says his last goodbye to his father. The dragon is later defeated as Ian uses a spell to open up its core before Laurel throws the Curse Crusher sword at it, destroying both the Curse and the monster once and for all.

The Curse is a huge beast in the form of a massive dragon that is made out of Ian's school. It has the face of the school's mascot while its body and horns are made out of rough bricks. It also has a red mist on its wings and all over its body while the core is in its center.

Before becoming a dragon, its true form is a floating sphere made out of the red mist.

The Curse is unleashed

Barley notices he has released the Curse
Barley Lightfoot: "It's a Curse."

The Curse forms a sphere-like Core

The Curse starts to form a creature

The Curse forms a dragon

The Curse Dragon looks for the Phoenix Gem

The Curse Dragon chases after Barley

The Curse Dragon gets tricked 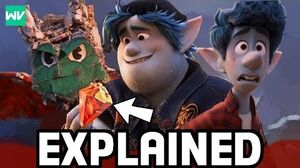