Dark Monster
The Cursed Coach is a minor antagonist and a boss in the video game Kingdom Hearts: Birth By Sleep. It is a massive, pumpkin-like Unversed monster that attacks Aqua in the Enchanted Domain.

The Cursed Coach was spawned from the hatred and jealousy of Lady Tremaine, Anastasia Tremaine, and Drizella Tremaine towards Cinderella. The Cursed Coach attacks the object of their hatred, Cinderella, while she and the Grand Duke are walking to the ball at the palace. It swipes away the Tremaines just before Aqua arrives, holding off the Cursed Coach long enough for Cinderella and the Duke to escape.

Aqua then battles the speedy Cursed Coach, which can only be stunned by using Thunder magic. The Cursed Coach will attempt to ram Aqua, swipe her with its tentacles, spawn smaller Unversed, and inhale her whole, but Aqua eventually triumphs and defeats the Unversed.

Later in the Mirage Arena, Aqua, Ventus, or Terra can fight a more powerful variation of the Cursed Coach during the Wheels of Misfortune and/or Villains' Vendetta challenges. 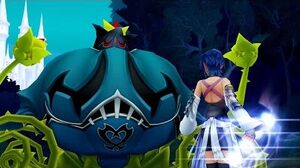