Use G-Virus to become to a monster. (Suceeded)

Curtis Miller is the secondary antagonist of Resident Evil: Degeneration. He is the older brother of Angela Miller and is a disassociated scientist from the WilPharma Corporation.

Dr. Curtis Miller was researcher for the WilPharma Corporation in 2005. He was fired and arrested after his aggressive disapproval of their t-virus vaccination program. He lost his family in the Raccoon City Destruction incident and made it his lifelong aim to force the United States to admit its responsibility.

He was voiced by Roger Craig Smith and the motion capture for him was done by Derek Mears, who has also portrayed the classic Predator in 2010's Predators as well as Jason Voorhees in the Friday the 13th remake.

Before the Raccoon Incident, Curtis was a normal husband and father dressed in a professional fashion, as well as well-groomed short dark hair.

After the incident and becoming a terrorist, he allowed his hair to grow out to the point where it reaches it back, as well as being dressed in a long dark green trench coat, white shirt, dark pants, and shoes.

After injecting himself with the G-Virus, he started undergoing a mutation that turned him into a grotesque monster similar to William Birkin, however, his final form still resembled a darkish humanoid with a massive eye on its shoulder, elongated arms with a clawed hand.

Before the Raccoon City Incident, Curtis was a normal husband, father, and older brother, caring for his family members and working to support them. He has proven to also be kind and honorable, consoling his younger sister for attempting to save someone, but then ended up endangering others in the process.

However, after losing his wife and daughter in Raccoon City, he became overwhelmed from greif and sought the truth about what happened, after the evidence was destroyed via a missile strike on his former hometown. Curtis became rather agressive and combative against the WilPharma Corporation, which soon resulted in the TerraSave group to disassociated itself from him to the point of even been arrested for a time.

Due to his attitude and vendetta against the WilPharma Corporation, he was used as a scapegoat and blamed for the attack at the Hardvardville Airport and bombing at WilPharma Corporation. In the wake of both incidents, in addition to knowing no one would believe him, a desperate Curtis in his last attempt to reveal the truth injected himself with the G-Virus.

Because of his deep-seated anger and mutation, which has driven him to follow his instincts, he started lashing out against anyone and everyone in his path using relentless force. As a result of the G-Virus' instinctive desire to reproduce and losing his humainty, Curtis sought to use his last relative, Angela Miller as a host through implanting her with the G-embryos.

However, he maintained some semblance of his human self after seeing a photo of his family, fighting against his desire to do any harm agains this younger sister, which fought against the G-Virus' instincts.

Born and raised in Harvardville, Curtis lost his family in the Raccoon City incident. He was once a part of the company WilPharma, but was fired/left after a feud with the company. He eventually joined Terrasave to protest against WilPharma but Terrasave disassociated themselves due to the violent threats Curtis made to WilPharma.

He was used by the company, as a scapegoat to hide the real dealers with the Bioterrorists - themselves. While he was inside the WilPharma research lab a bomb set off, destroying the building. The G-virus (Most likely provided by Frederic Downing) had infected Curtis then aided by his younger sister Angela. He transformed in front of her and defended himself against a heavily armed Marine task force.

As a mutated monster, losing his sense of self, he then turned on his sister to use her for breeding, because of the virus' instinctive desire to reproduce itself. Angela was saved by Leon S. Kennedy when he crushed Curtis with tons of metal schaffling. Soon enough, he began to mutate again.

Becoming even more grotesque than before, he attacked the surviving marines who were trying to escape in an elevator, tearing the elevator from its tunnel and hurtling it to the ground far below, killing all inside. He then turned to attack Leon and Angela once again.

Leon and Angela managed to avoid him for a short period of time, but he caught up with them and knocked Leon away while he chased Angela. He managed to regain consciousness for a brief moment when he picks up a picture of his family that Angela accidentally dropped from her pocket and tells Angela "Run! Go! Go! Go! I don't want to hurt you! Please!".

As he lost his humanity again, he prepared to attack when suddenly the section he was standing on collapsed and he began to fall a great height. As he began to fall, he used the tail his mutation produced during his second transformation and wrapped it around Angela's foot while she was being held onto by Leon.

As Angela pleaded Leon to let her go, he refused and instead shot Curtis in his skull, causing him to release his sister and careen downwards, dying on impact along with the explosion that followed. 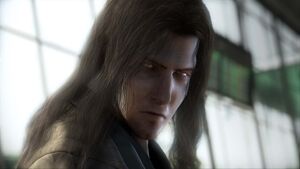 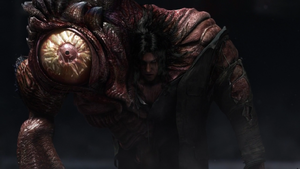 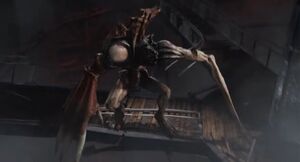 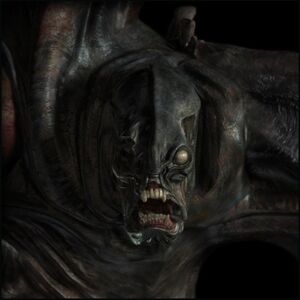 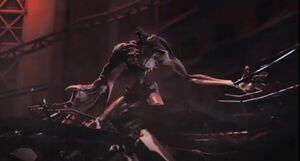 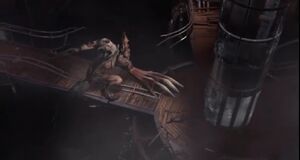 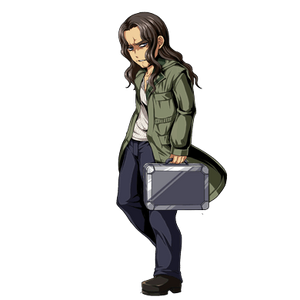 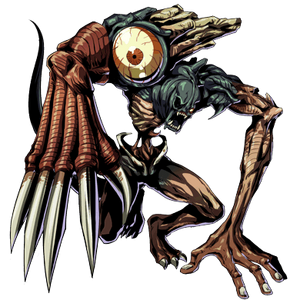