Swindle all of Dedede's money (all failed).

Customer Service (also known in the 4Kids dub as Frontman or NME Salesguy) is the salesman and spokesperson of Nightmare Enterprises in the Kirby: Right Back at Ya! anime as well as the show's secondary antagonist. He is the one who sells monsters to his company's customers and he has the most important role in the company besides ENeMEe, who is the leader.

He was voiced by Banjō Ginga in the Japanese version, and Dan Green in the English dubbed version.

In the original Japanese version, Customer Service is extremely polite, gracious, optimistic and intelligent, but despite that, he never misses a chance to subtly insult his customers. However, in 4Kids's dubbed version, he is a very brash, scheming and manipulative person, and his persuasive speech style is that of a stereotypical used car salesman. He also appears to have a good sense of humor, often using puns and other funny sentences when he speaks.

Customer Service also treats his boss by the name of ENeMEe with great respect and loyalty.

The Customer Service is always seen in the monitor for the monster transporter in Dedede's castle, so he is only seen from chest up. He appears to be a very tall person, but in the final episode it is revealed that he is, in fact, almost as short as Kirby. His facial features are very similar to those of his boss, ENeMEe. His chin is large, he has purple hair with green stripes, and always wears black sunglasses with orange lenses. But in the episode "Abusement Park", he wears red framed, blue lensed sunglasses for unknown reasons. The rest of his attire is always the same (except in the episode "The Kirby Quiz", where he wears an orange kimono).

It is unknown what his eyes are like, since they are always obstructed by his sunglasses. However, the rest of his face is highly expressive, especially the brows. He has a tendency to make gestures with his hands or straighten his sunglasses when he wishes to make a point of something important.

While Kirby, Tiff, and their friends and allies (and King Dedede and Escargoon unexpectedly) come to the final showdown with ENeMEe, they entered his fortress. King Dedede decides to betray Customer Service by performing a sneak attack. Nightmare hypnotizes both Dedede and Escargoon through the former's phone, and kidnaps Tiff to bring her to Customer Service. He later reveals himself as a short businessman, and orders his boss to take Tiff. As revenge, Dedede summoned Chef Kawasaki to feed him a grotesque meal.

After ENeMEe was defeated by Kirby, Customer Service is seen brushing his teeth from that awful meal. After Chief Bookem announced that Nightmare Enterprises is about to blow up, much to Customer Service’s horror, he is last seen fleeing from the scene. Is is unknown what became of Customer Service, it is presumed that he either died when the company exploded or that he somehow managed to escape. 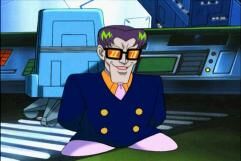 A rare screenshot of Customer Service's full body.
Add a photo to this gallery

Retrieved from "https://villains.fandom.com/wiki/Customer_Service?oldid=4025801"
Community content is available under CC-BY-SA unless otherwise noted.