Robotic Minion
Cutthroat is a minor antagonist in Generation One of the Transformers franchise. He was a member of the Terrorcons.

He was voiced by the late Tony St. James, who also voiced Brawl and Blot.

Cutthroat debuted in the late third season episode "Grimlock's New Brain", along with the other Terrorcons. They were among the Decepticons who accompanied Galvatron to Unicron's head in the hope of salvaging some anti-electrons. They were defeated by the Technobots, newly created by the temporarily hyper-intelligent Grimlock.

Cutthroat was given a showcase with the other Terrorcons in "Money is Everything", when they were employed by the Quintessons to steal the recreator machine. In "Call of the Primitives", he was among the animal-form Transformers summoned by Primacron and drained of energy by Tornedron, being revived when Grimlock defeated him.

In "The Return of Optimus Prime", Cutthroat was part of a raid on Mark Morgan and Gregory Swofford's laboratory to steal a new metal. He lasted appeared in "The Rebirth" as part of Galvatron's final attack on Cybertron.

Cutthroat first appeared in the Headmasters miniseries as one of the Decepticons who accompanied Scorponok to Nebulos. He took part in a rampage through the Nebulan gardens of Splendora, only to be driven off by Brainstorm, Hardhead and the Technobots. He was later part of the first battle with the Autobot Targetmasters.

After Scorponok's Decepticons travelled to Earth, Cutthroat made his first appearance in the main comic in Issue #49, during the Underbase Saga, when he was involved in the battle with Ratbat's Decepticons, battling Buzzsaw. He was deactivated in the following issue during the rampage of the Underbase-powered Starscream.

The post-movie version of the character appeared in "Time Wars", where he was supposed to be bringing the other Terrorcons to join up with Soundwave and Hun-Gurr but got distracted attacking a human city. After their energy draining plan was foiled by Kup, Arcee and Red Alert, they pursued the Autobots into the past, displacing Fangry and several other present day Decepticons into limbo in the process. Caught up in the battle with Galvatron, they quickly retreated to their own time. 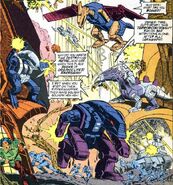