Cutty is the secondary antagonist of the 2014 haunted maze attraction "Clowns 3D" at Universal Studios during their annual Halloween Horror Nights. She is the daughter of Sweet Licks, sister of Bubba, and a worker in the ice cream factory.

Cutty, Sweet Licks, and Bubba were once ordinary people dressed as clowns running the Route 66 attraction and company Sweet Licks Family Fun Center and Ice Cream Emporium. However, after the villainification of clowns through horror media, dressing up as clowns to entertain people became a difficult business practice, as no one wanted to shop or even visit their attraction anymore.

To make matters worse, the country developed a demand for low-calorie food, resulting in very little people being interested in Sweet Licks' treats. The company fell on hard times, and eventually Sweet Licks snapped and began killing humans, turning them into "all natural, high protein" ice cream and eating and selling it to keep the business going. At some point, Cutty and Bubba joined him, along with a handful of other clowns that came to aid him in his killings and ice cream production.

After escaping Bubba, guests enter the factory to find a massive freezer filled with hanging corpses and mutilated body parts, frozen and covered in blood along with barrels of ice cream with the names of their disturbing flavors written on them. Sweet Licks will burst out, wielding a chainsaw. After escaping, guests find a bathroom with cages filled with people, two women vomiting in toilets and sinks, toilets and urinals filled with vomit and candy. Sweet Licks is shown to gorge the victims with his human ice cream until they are fat and eventually burst and die. He then stores the bodies and the vomit to use in his ice cream. He stores the disgusting ingredients in his "Vomitorium”, which also houses Vomit Monsters that attack the visitors.

Cutty is sick and deranged, as she is shown to get gleeful delight from torture and gruesome murder. While she does not speak, she laughs at scared guests and is usually cackling when she is killing or mutilating someone. Because of the nature of the products the factory manufactures, it can be safely assumed that Cutty has killed hundreds of people. However, it is unknown if she is interested in the profit like her father.

Cutty wears white makeup all over her body, with blue designs around her eyes. Her hair is dyed blue with red ends. She is covered in cuts and slashes (presumably self-inflicted), including a massive Glasgow smile that extends across the majority of her face.

She mostly wears a red and blue schoolgirl outfit with white frills, a black and red plaid skirt, white leggings, and black shoes. However, in some parts of the attraction, she wears nothing but blue and red striped pants and a revealing bra. 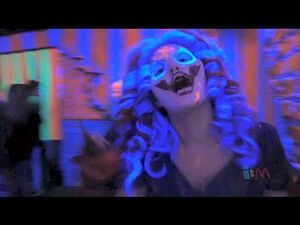 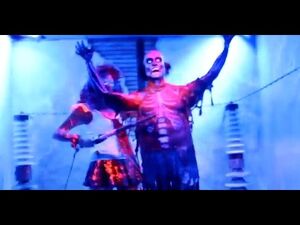 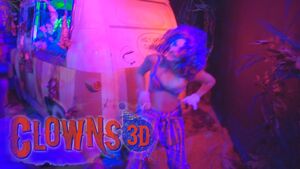 Cutty in her revealing outfit. 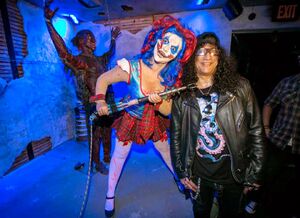 Cutty with the attraction's composer, Slash. 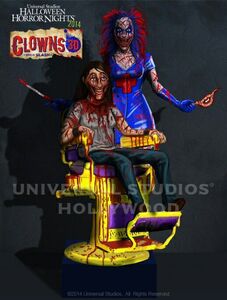 Concept art of Cutty with a victim. 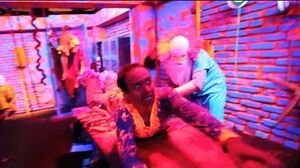 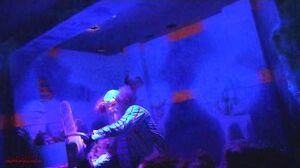 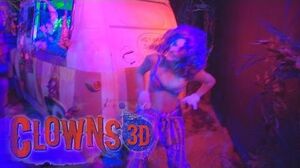