Multiplying their siblings and consuming everything in sight.

Eat, kill, and multiply her underlings.

Artificially Intelligent Superorganism
The Cy-Bug Queen is the main antagonist and final boss of Wreck-it-Ralph: The Video Game. She is a robotic monster serving as the leader of the Cy-Bugs.

The Cy-Bugs hatch and immediately begin to attack Sugar Rush, eventually heading to Game Central Station. Vanellope and Calhoun evacuate with the other denizens while Ralph and Felix are given the task of destroying the bugs. Ralph and Felix journey off into Fix-It Felix Jr., Hero's Duty, and Sugar Rush to eradicate the bugs.

Eventually being led to Game Central Station, where they defeat the Cy-Bug Queen through the use of massive grappling guns. After the bugs are defeated, Ralph heads to Sugar Rush to celebrate the new holiday made by Vanellope, and then back to his own game. 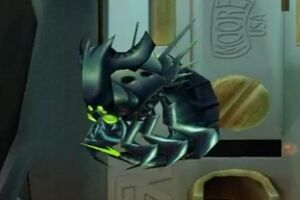 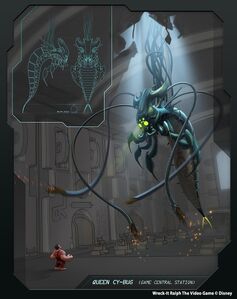 Concept art of the Cy-Bug Queen.
Add a photo to this gallery

Retrieved from "https://villains.fandom.com/wiki/Cy-Bug_Queen?oldid=4064781"
Community content is available under CC-BY-SA unless otherwise noted.